Control YouTube video playback speed  in Firefox with these 3 add-ons to control YouTube video speed on Mozilla Firefox. Using these add-ons, you can run Youtube videos at slower or faster speed in Firefox. These add-ons provide one click option to change Youtube playback speed. You can choose to remember settings so that all videos are played at the same speed, or you can choose to change speed of only specific videos.

Controlling the playback speed of Online YouTube videos is something that I always wanted to do while watching some online Tutorials or lectures. It helps a lot to Slow down the video to harness maximum details of the tutorial. Sometimes I need to fast forward the video to reach directly to the content of video that matters the most. This can also be done by jumping to a certain position in the video by directly clicking on playback slider but this way you won’t be able know what exactly you skipped. But, by fast-forwarding a video, you always know what you skipped.

This is why I have compiled here 3 add-ons to control speed of YouTube video On Mozilla Firefox. 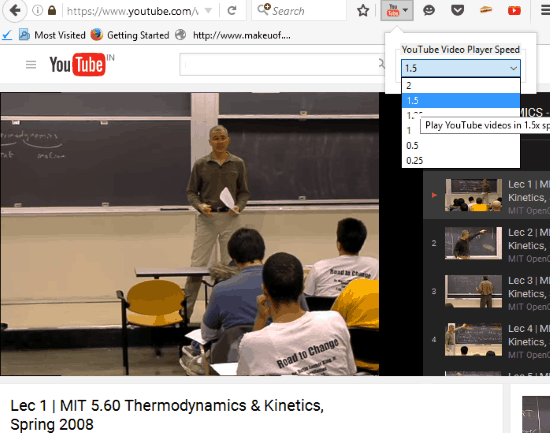 YouTube Video Player Speed is a free add-on to control playback speed of YouTube Videos on Mozilla Firefox. Its a very simple plugin as it only helps in controlling the speed of the YouTube video in 6 predefined rates of playback: .25x, .50x, 1, 1.25x, 1.50x, and 2x  are the 6 different rates of playback this add-on offers. you just need to select one of these playback rates from the toolbar icon of YouTube Video Player Speed. The setting that you choose will persist and all the subsequent videos will also play at that speed. 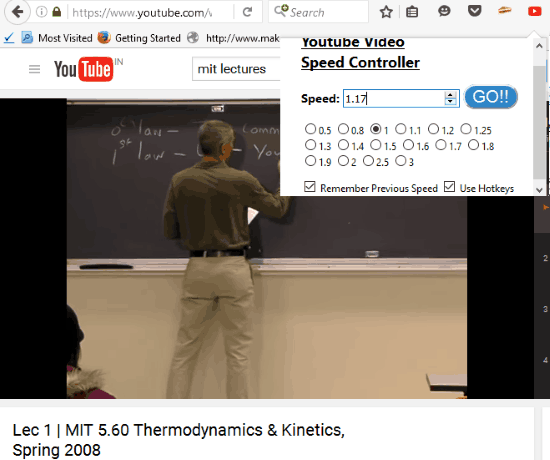 Html5 YouTube Video Speed Controller is a free add-on to control the speed of  YouTube video on Mozilla Firefox. It is an intuitive plugin for Firefox that actually lets you decide the exact rate at which you want to play the YouTube video. In simple words, you can customize the playback speed of YouTube video with this add-on. There are also a few predefined rates of playback between 0.5 to 3 to choose from on the interface. The add-on always remembers the last speed you customized for YouTube playback by checking the check box “Remember Previous Speed”. You can also enable hotkeys by checking the Hotkey check box. This add-on also works for other online video websites like Vimeo, Daily motion, etc. 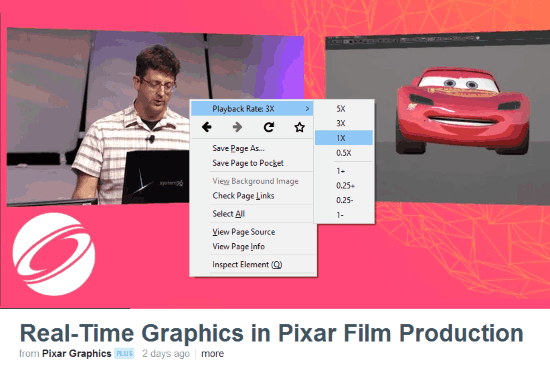 Faster Video is a free add-on to control the speed of  YouTube video on Firefox. Unlike other two plugins in this list, Faster Video does not have any icon in the toolbar. You can control the speed of video using this plugin by simply using the Playback rate option from the context menu. The context menu can be accessed by right-clicking on any portion of the Firefox interface except the video. It allows to change the video playback rate from 0 to 5x. You can either directly select 0.5x, 1x, 3x, or 5x or,  you can increase or decrease the playback speed by selecting 1-, 0.25-, 0.25+, or 1+, from the context menu. It also works for other online video portals with Html5 videos.

You can also check these useful Firefox add-ons :