In this tutorial, you will learn how you can use Siri to control Spotify music on iPhone. Siri every time listens to your command but when it comes to playing music on Spotify, Siri does not listen to you at all.

The reason is Apple never allowed to access third-party apps through Siri which is not a good decision. Most of you might not like the idea. But you don’t need to worry as Apple has released a new feature. Eventually, Apply now has introduced seamless Spotify integration for iPhone in iOS 13. If you have the latest device of the iPhone, you already have the new iOS 13 or later version.

With this version, you just need to enable Siri for Spotify. And whenever you speak to Siri to play music on the Spotify app, it will play it. With your voice, you can play, pause, set a volume of songs, and skip songs on Spotify. let’s know how to get it done. 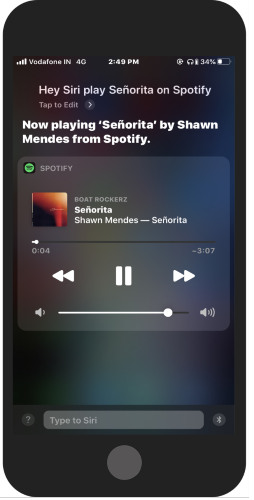 Also read: Create a Playlist on Spotify for Your Pet.

Use Siri to Control Spotify Music on iPhone

In order to connect Siri with Spotify, you just have to enable the option on your phone. Before this, you need to make sure that your iOS version is updated with 13 or later.

Now go through the following steps I mentioned below. 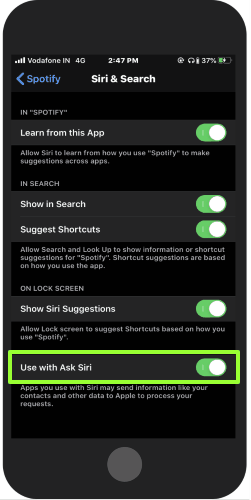 Now you have proper control over Siri to play music on Spotify. Tell your Siri to play your favorite songs on Spotify. And as you can see in the very first image, it plays music from Spotify. Since Apple has allowed third-party access, you can connect other music apps too.

Also read: How to Sleep Timer on Spotify?

Apple now lets you play music on Spotify easily. You just need to enable the Siri for Spotify app and you can tell Siri to play music from your Spotify playlists. Using Siri, you can also adjust volume, skip the song to play next, and pause the song right from Siri screen. So, if your phone is updated to the latest iOS version, you can grab this feature and listen to music on Spotify through Siri.