Tweeting anonymously, when can it come handy, I can think of a couple of situations, like when playing a prank on a friend, when you want to express anger at someone but not directly, when you want to raise your voice for an issue, etc. Anonymous tweets can help you say what you want to someone, without them actually knowing it was you. Of course there is a good chance that people misuse this anonymous service by saying profane things and abusing others. That is why a lot of websites I came across which provided this service of tweeting anonymously have been shut down or are no longer in service.

I actually came across a lot of websites which used to provide the anonymous tweeting option, but most of them are no longer in service. Some of them were very popular and you might have heard about them like whispererly, tweets from above, tweets from below, drunktwt, shhtwitter, etc.

After going through a lot of websites, I was actually able to find only one website which let me tweet anonymously. 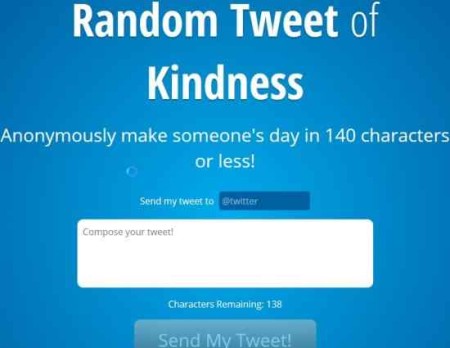 The website lets you send anonymous tweets to any Twitter handle. In the first box “send my tweet to” you have to mention the Twitter handle of the person you want the message to go to. Second box is for typing your message in 140 characters. Then click the send my tweet button. That is it, your message will be sent to the Twitter user you mentioned. The message will be sent addressed to the person and will appear in their notifications section.

The website recommends that you use the website to send kind messages to people you admire and do not misuse it by sending profanity to people.

I found a few more websites but they didn’t work for me properly. I’m listing them because you guys might have better luck with them. These websites let you send tweets, but they never showed up in my notifications section. The websites are

All the above websites and Twitter handles, let me send a tweet using their websites, but the tweets were never received by the person I sent it to.

A lot of websites claim to help you send anonymous tweets, but most of them are out of service or have suspended accounts. Out of all the services that I found and tested, only the one listed above let me tweet anonymously.

Also, in case you have come across any such service which lets you send anonymous tweets, do let me know. I would include them in this article.