The digital media player is dominated by the likes of Apple TV, Google Chromecast, Roku etc. But hey, what’s the bad thing in having another alternative. Guess Amazon realized it as well, and decided to hop in as well. 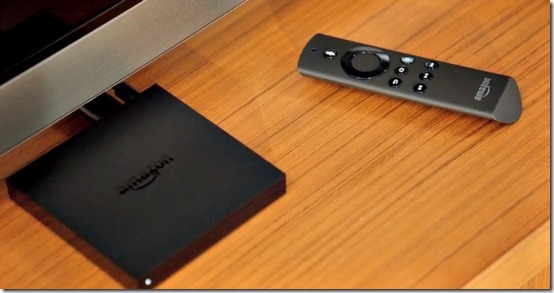 What is Amazon Fire TV?

Amazon Fire TV is basically a simple digital set top box cum digital media player that connects via High Definition Multimedia Interface (HDMI) to your High Definition TV (HDTV). The Fire TV is powered by a Quad Core Processor, and lets you connect to a large number of subscription based media delivery services (Netflix, Hulu etc.) It retails for $99 at Amazon’s own website (though overseas prices would be a little bit more). The device also doubles up as a game console of sorts, so that you will still have something to do even if can’t find anything interesting from an already massive and ever increasing library of digital media (though, you need to buy a separate game controller to explore complete library of games).

This device is shipping now and you can order it today on Amazon’s website.

For your pleasure, here is a funny TV commercial for Amazon Fire TV that Amazon will be airing shortly:

Amazon Fire TV is entering a market already filled with quite a bunch of competitive players, with each of them having something unique. For example, the $35 plug and play Chromecast by Google beats it in the pricing department by retailing at less than half the price of the Fire TV. However, Amazon’s massive online digital content library and features like free cloud backup might just turn the ball in the Fire TV’s corner. How much share of the digital content services market Amazon Fire TV eventually manages to grab for itself, is something that remains to be seen.

What do you think about Amazon Fire TV? Do you think it possesses the capability to topple the established players off their thrones, or should I say, TV tables and racks? Do let me know in the comments below.