Monster Dash is a free iPhone running game in which you have to make your character run, jump, and kill the enemies coming in your way. The Monster Dash game has been developed by Halfbrick Studio who are also the developer of Fruit Ninja and Jetpack Joyride, one of the most popular games for iPhone.

Just like both of these games, Monster Dash is also very addictive and interesting game with a simple gameplay. The game consists of different locations for you to play along with different types of monsters, vampires, demons, mummies, and yetis.

You have to kill the monsters either by using weapons or by simply jumping on their heads. The game consists of different weapons which you get as you will proceed in the game. Each of the weapon in the game has its own ability. You can check statistics from within the game. The game is synced with Game Center for checking the Leaderboards and Achievements. There are various achievements which you can unlock while playing the game.

As I told you that this game is developed by the same company who developed Jetpack Joyride. Hence the main character of this game is the same person who was in Jetpack Joyride, Barry Steakfries. In this game, Barry has got struck in a World full of monsters. He has to run from there while killing the maximum number of monsters which come in his way. Apart from the monsters, he might also come across various obstacles in the path so you also need to avoid them. As you will go on to play the game, speed of the game will go on to increase which means you are required to concentrate on the game more to keep going. 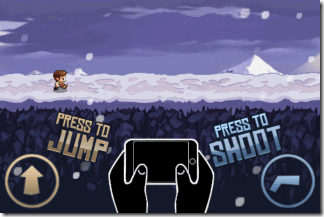 The controls of the game are very easy to understand and use. Barry will keep running on his own, you only need to take care of making him jump to avoid obstacles and gaps between buildings & to make him shoot the monsters using his weapons. You can make him jump by tapping on left side of screen while to make him shoot monsters, tap on right side. These are the only two controls which you need to know to play the game. The controls are easy but how far can you go in the game depends on how well can you use the controls. 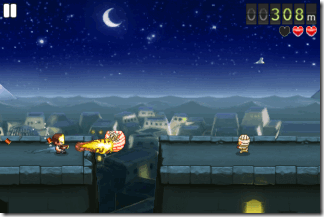 While playing the game, do keep in mind that you have got only three lives. Barry loses one life each time for touching the monster or hitting the obstacle. While running, you also need to save him from falling into gaps between buildings. If you fail to do so then you will lose all the lives at once. Whenever you will lose all the three lives, the game will get over. 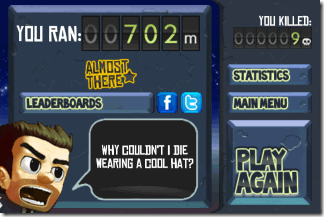 As I have mentioned that game offers you different locations for playing but unfortunately you can’t select them on your own. Whenever you start  a new game, the location is given to you on random basis. I think it has been done to maintain your interest in the game.

To check the stats, you need to tap on the About option on game’s homepage followed by Statistics option. All the stats are divided across following categories:  General Stats, Monster Stats, Weapon Stats, Death Stats, Random Stats, and Award Received. Each of the stats includes several individual stats. 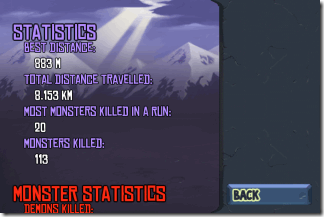 You may also like these 4 free running games for iPhone.

Monster Dash is a very simple yet interesting and additive iPhone running game. The game is very much fun to play as you go across different locations and kill different monsters. If you are fan of running games or if you loved Jetpack Joyride then you will surely love this one too.