Here are 5 translator app for iPhone users, with the help of which you can translate almost any language into any other language of the world. These apps are very useful for specially students who are learning new languages. All you need is to enter the word, sentence or phrase whose meaning is not known to you. The app will tell you the translated meaning of your query.

Here I have selected 5 apps which will help you in dealing with different languages. The 5 apps I have chosen for you are: Google Translate,  iTranslate, iHandy Translator, gTranslate, and AT&T Translator. 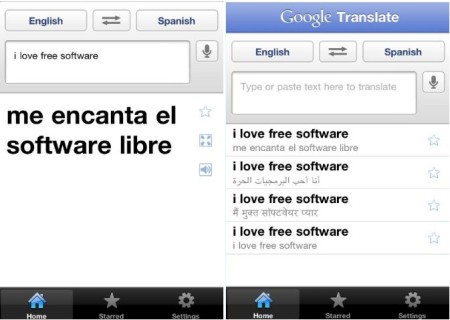 Google Translator is known to everyone as the best and free translator app available for iPhone. I don’t need to explain much about this app, and about what this app does because surely you must have used this app atleast once. But here, I would like to mention that this app can translate almost all languages of the world. This app also provides the feature of voice recognition (but only for selected languages), which enables you to hear the pronunciation of the word or phrase loudly.

Google translate app is also available for Android users. You can also read our review on Google Translate for iPhone.

iTranslate is another free translator app available for iPhone users to translate one language into another language. With the help of this app you can convert any word, text or phrase into desired language. This app supports multiple dictionaries. This feature helps you to get the meaning of same word in different sentences.

This app supports 60 languages of the world. Also gives you text to speech conversion. This app also allows you to save the translation to your phone or you can also Tweet, SMS or eMail it to anyone.

Get iTranslate from here.

The interface of this app is very nice and clean. Choose your desired language and start making translations. 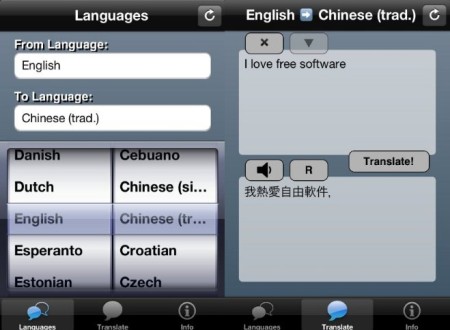 AT&T Translator is my last choice as a translator app for iPhone users made by AT&T Inc., to make basic translations in daily life. This app provides only 6 international languages right now to translate to and from. But the app developers claim that they will be adding more languages to the app soon.

Get AT&T Translator from here.

This was our review of 5 Translator Apps for iPhone. You can use any of these apps to translate text from one language to another language. Try any of these and tell us how was your experience with these apps.