Here’s a list of 5 college football results apps for Android which can be used to keep track of results from the very popular college football league in the United States. Some of the apps go beyond just being able to report back college football results. They also include all the latest news, rankings, schedules, social network content (tweets, posts from relevant players) and some of them even cover other sports like basketball and baseball.

Let’s see what kind of apps are available, and what exactly it is that they have to offer. 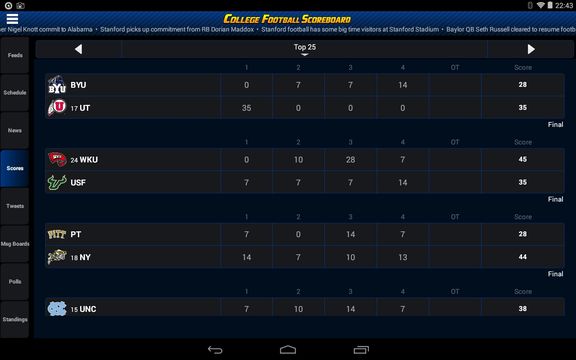 College Football Scoreboard is a great example of the kind of multi-purpose apps that I talked about in the introduction. Not only will you be able to keep track of college football results, but also news stories about college football, schedules, team standings, social media status updates (again relating to college football), polls and there are even message boards for exchanging messages with other fans.

All this is packed in a very intuitive and nice to look at interface. All the previously mentioned sections of the app can be accessed from the left sidebar. To top it all off, there’s a news strip that shows latest news updates at all times at the top of the app. 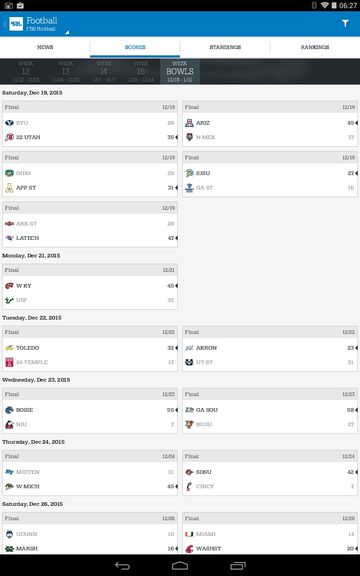 After launching the app you’ll need to configure which sports and which college teams you’d like to keep track of. After doing that, this college football results app will give you access to scores, rankings, standings and a news feed to keep up to date on all the latest happenings. Notifications are possible to setup. You’re actually able to setup alerts about scores as the games are played. Up to 3 favorite teams can be tracked, their progress through the league using this app. And remember, they don’t have to necessarily be football teams.

Also, have a look at 5 Study Planner Apps For Android. 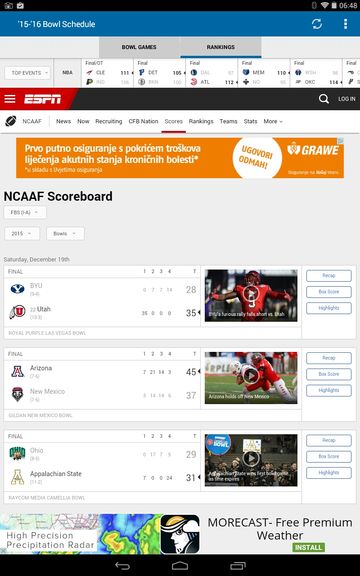 College Football Bowl Schedule is not as jam-packed with features like the two previously mentioned college football results apps, but it can still be used to keep track of scores from your favorite teams.

College Football Bowl has only two tabs at the top of the application. First one is the “Bowl Games” tab where you’ll see a list of all the recently played games and also upcoming games, once that match days come a little bit closer. Second tab is the “Rankings” tab where more info about current team rankings from the ESPN website can be found. Within this tab you’re basically browsing the college football section of ESPN, so you can also find news on recruitments, injuries, team status and more. 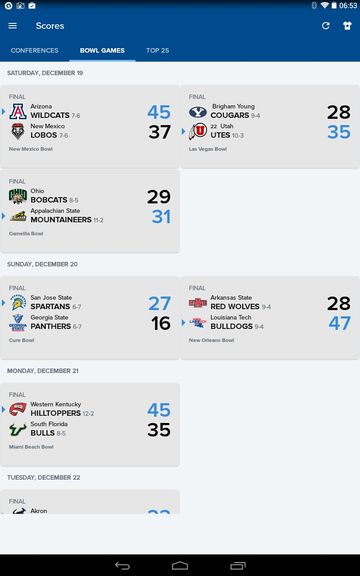 CBS Sports is a results app that’s similar to NCAA Sports, only it doesn’t focus entirely on college sports. It goes beyond that, so next to college football results, you’re also able to look up what the situation is with NBA, MLB (baseball), NHL (hockey) and so on. App offers scores, news about happenings within the leagues that you’re following, push notifications and more.

Another very interesting feature available in this app are actual live streams of matches. Plus radio broadcasts are also available. Seeing how this is CBS that we’re talking about, it’s no wonder that streaming is available, but there’s a catch. I had problems getting streaming to work, and other people report the same issues. Streams are probably geo locked and only available in the US, but there are ways around that if you’re creative enough. 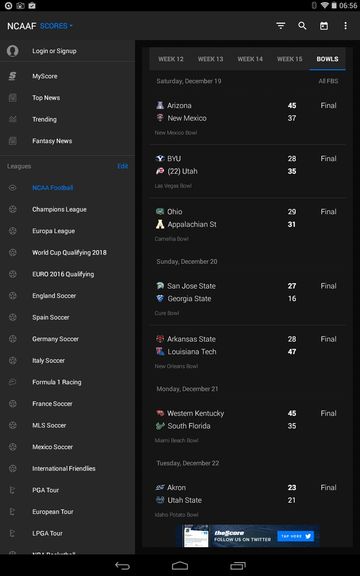 When it comes to reporting on college football results, this app lets you setup your own news feed made up of selection of teams, players and leagues that you want to cover. Once you’ve made your selection, the app will the send you scores, top news, stats and more. Search tool is available to help you find what you’re looking for faster.

I have to say that out of the 5 college football results apps from the list above, the ones that caught my interest the most are theScore and College Football Scoreboard. They both offer a lot of useful information about college football, much more than just results, and they look good while doing it (meaning I like their interface designs). Let me know what you think by writing a comment down below.