This write-up discusses 5 best Notepad alternatives for Windows 10. There are quite a few built-in applications that have been a part of almost versions of Windows and as such, have become staples of Microsoft’s line of Operating Systems. And one of them is the humble Notepad. Extremely lightweight and easy to use, Windows Notepad has been used by almost every computer user at some point of time or the other. It’s simple, and for the most part, works extremely well.

But what if the bare bones Notepad doesn’t really cut it for you, and you’d like to have something that offers a little bit more features? That’d be great, right?

Looks like your wish has been granted, as that’s what this blog post is all about. So let’s not waste more time, and find out more about the 5 best Notepad alternatives for Windows 10. 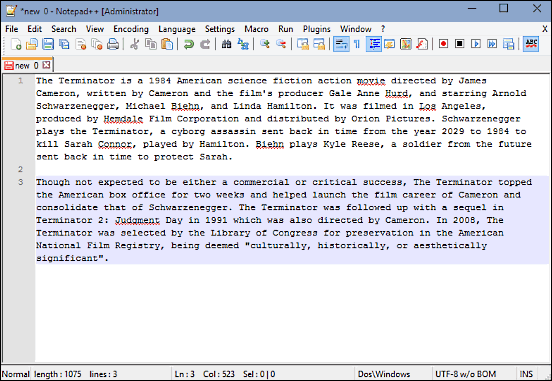 One of the most well-known text editors out there, Notepad++ has a truckload of features that make it a perfect Notepad alternative for Windows 10. In addition to all the regular note taking, Notepad++ can handle your programming needs as well, thanks to the built-in Syntax Highlighting and Syntax Folding features. Thus, it can replace your code editor as well. Apart from the standard syntax highlights, you can manually specify the parameters (colors, background, folding style etc.) for the same as well. Notepad++ is pretty customizable as well, and you can choose from a variety of editor views, such as minimalist, vertical tab, multi-line tab, and vertical document list. It includes a powerful search and replace capability, powered by regular expressions. Then there are goodies such as automatic word completion, function completion, and parameter hints. Thanks to the tabbed interface, you can view/edit multiple documents at the same time. Notepad++ supports multiple language environments, bookmarking, and lets you record and playback macros as well. And the fact that it’s available as a portable application (along with the regular installable variant) ensures that you can take Notepad++ with you anywhere you want. The best part is that you can further enhance Notepad++ using some really nice plugins available out there. 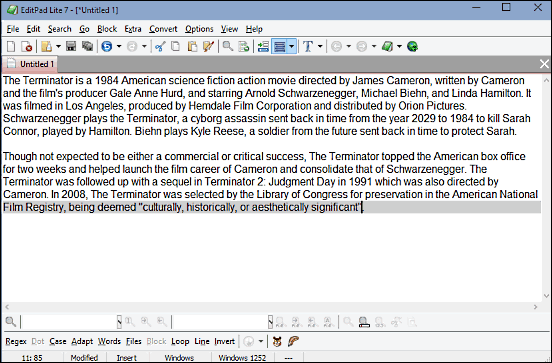 Want an ultra powerful yet super easy to use Notepad alternative for Windows 10? EditPad Lite has you covered. With more features that you can explore in one go, EditPad Lite is one powerhouse text editor application. Thanks to a tabbed interface, you can open/edit as many files as you want at a time. What’s more, multiple files can be combined into a project and worked upon at the same time, as almost all of EditPad Lite’s editing commands work on all the files in the project. With a robust search powered functionality powered by regular expressions and adaptive case options, you can quickly find the text you’re looking for, and edit it. EditPad Lite also supports autosave and backup, so you can keep on working without having to worry about your work getting lost due to problems like a system crash. The application even lets you clip certain parts of the text and save them as snippets, which can be then directly inserted into any file, wherever you want. EditPad supports almost all major text encoding formats, and lets you customize a whole lot of stuff, including even the tab colors. Visit this link to know more about it. 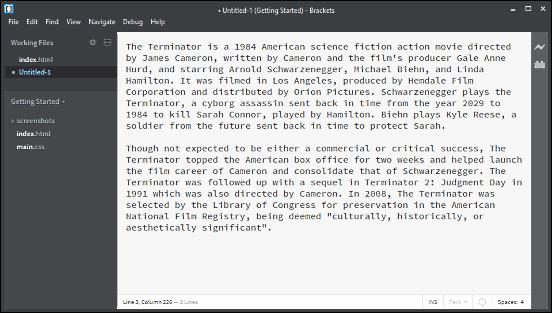 You can go on searching as much as you want, but I’m pretty sure you won’t find a text editor as beautiful as Brackets. Coming from the stable of none other than Adobe, this is one gorgeously designed text editor software. Although Brackets is primarily intended for development purposes (the application’s website states the same as well) and thus quite naturally includes a whole bunch of advanced features like line numbers, syntax highlighting, preprocessor support and whatnot; that doesn’t mean that you can’t use it as a perfect Notepad alternative for Windows 10. Heck, only the UI is reason enough to use Brackets. But there’s no dearth of impressive features in this application. Brackets lets you work with multiple files at a time, and you can effortlessly toggle between them, thanks to a handy navigation pane at the left that lists all the open files in order. If you want to rearrange certain blocks of text, it’s as simple and dragging and dropping them. You can view real-time count of the number of words, lines, etc., that you type in the editor. The functionality of Brackets can be increased multiple times by adding debugging tools and extensions. Find out more about it here. 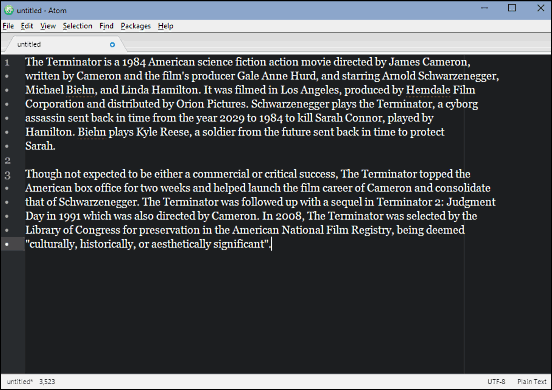 Although not as stunningly designed as Brackets, Atom is a pretty awesome looking text editing application that you would love to use as default text editor for Windows 10. And it has a quite a healthy number of features as well. Probably the biggest highlight of Atom is that it’s a desktop application, built using web technologies. This means that even though Atom runs and functions like any other program, you can tinker with it and add features to it in real-time, by doing something as simple as tweaking with the CSS code. In fact, Atom is a modular application comprised of over 50 open-source packages. So if you don’t like a feature and would like to have it work differently, you can do so by simply removing/adding the respective package responsible for that. While this might seem complicated, Atom can work pretty fine as a text editor. Then there are features like project wise search & replace, multiple panes, snippets, & code folding, which make Atom perfect for advanced users as well. 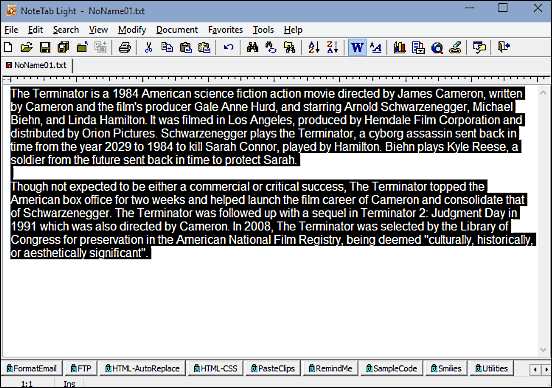 If the above-discussed applications are too flashy and feature loaded for you and you’d like to have something that’s a bit simpler, take a look at NoteTab Light. Although its dated UI leaves a lot more to be desired, NoteTab Light works perfectly for what it is and thus, can work as a fine Notepad alternative for Windows 10. Apart from all the regular features, NoteTab Light has some extra goodies, like clipboard capture, usage of variable-width fonts, in-text calculations, and creation & reuse of text snippets. Apart from that, there are a bunch of web development features thrown into the mix as well, such as built-in HTML & CSS code libraries, webpage templates, text to HTML conversion (and vice-versa), and then some more. NoteTab Light also supports regular expressions, and the fact that it’s available as a portable application just makes things better. Read more about it here.

There’s no shortage of text editors out there, and almost all of them offer a ton of extra features that make them perfect (even if a bit complicated) alternatives to the standard Windows Notepad. However, these are the ones I like the most. Take them for a spin, and let me know your favorite(s) in the comments below.