Here’s a list of 5 bill reminder apps for Android which you can use to never again miss a due date by accident. People who have busy schedules sometimes end up forgetting paying the seemingly never ending stream of bills that we are plagued with each month. Missing a bill could incur additional fees.

Apps from the list down below can help you keep everything in check. Let’s look at these app one by one. 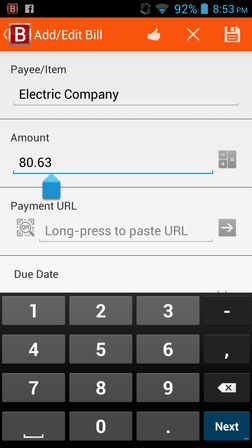 Bills Reminder allows you to easily manage you bills by adding them to the Bills Reminder database. On the image above you can see the bill creator, with the help of which bills are added to Bills Reminder.

To add a bill you will need to type in the bill name, payee name, due date, the usual. App allows you to keep track of both the incoming and outgoing bills, and it keeps a balance for money that came in and money that was spent paying bills. Bill can be setup as recurring and Android notifications are used when due date comes up. 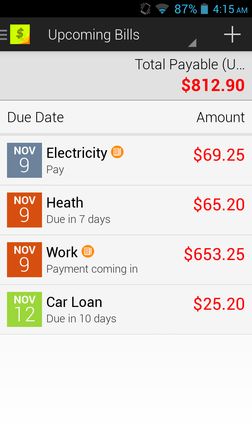 Bills Reminder by Handy Apps works just like its namesake from the Amazier team, only it’s much simpler.

Tap on the plus icon in the top right corner to add a new bill. You’ll have to type in bill name, amount, set if it’s payable or receivable, etc. This bill reminder app allows you to configure when the due date notification is gonna be triggered. It can be on the due date or up to a week before the due date.

Also have a look at Bill Reminder App For Android To Remind About Upcoming Bill Due Dates. 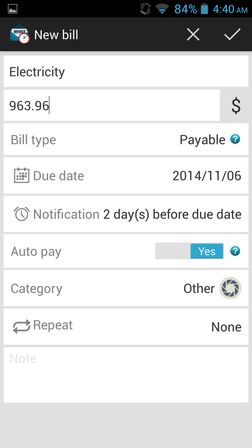 Easy Bills Reminder is another bill reminder app that’s basically a bill manager with a bill notifications as more of a side feature.

Bill imports/exports are available so you can import them from other apps. Notifications about a due bill can be setup separately for each bill. Bills can be recurring, and you can also set them up so that they are automatically “paid” on the due date, without notifications. 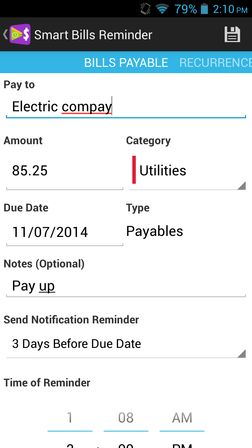 Smart Bills Reminder has two things that make it stand out from the two previously mentioned bill reminder apps. It lets you setup currencies and it has much more advanced overview over bills.

Adding bills is a bit different too, it’s setup in tabs. On the first tab you enter basic details, then on the next one recurrence. Last tab is for previewing the bill. This bill reminder app has lots of settings that can be tweaked, so make sure to check that out.

Also have a look at Never Miss Bill Due Dates With Bills Reminder Lite For Android. 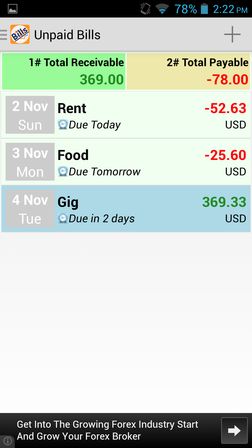 I’ll finish this list with Bills Reminder *, which might be my favorite bill reminder app out of all that I’ve covered up until now.

Granted they are all similar, but what makes them interesting in my mind is the ease of use and a more optimized interface. Again both payable and receivable bills can be managed. Notification reminders can be setup individually for each bill.

Like I already mentioned I really enjoyed Bills Reminder *, but the differences between the apps mentioned above are minuscule. You can’t go wrong no matter which one you choose, they will all keep you notified and alert about both incoming or outgoing bills.