Update: Sendroid is actually available for Chrome as well, so you can use it in Firefox as well as Chrome. Link for Chrome extension has been added at the end of this review.

The Android app and the Firefox Add-On are extremely simple to set up. When you send any URL or Image, you’ll see a notification on your Android device with which you can interact to Share or Open the URL or Image via relevat Android app on your device or just download the image directly from the Notification area. 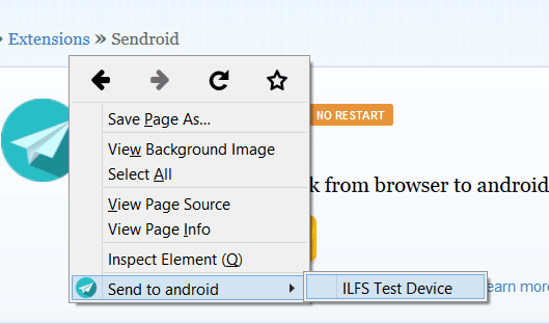 Set up Sendroid for Android

The Sendroid app for Android is one of the simplest app to setup that I have come across. It only has to be set up once for receiving the links and Images from your Desktop Firefox. The moment you launch the app, you will see the main screen similar to the first screenshot below. 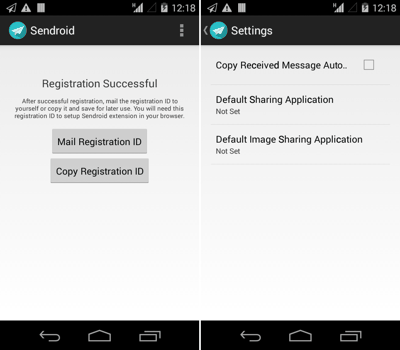 If you don’t see ‘Registration Successful’ notice, just close and reopen the app. This screen clearly states that the app has generated the Registration ID, which you can either Mail yourself or Copy somewhere. This registration ID has to be entered in the desktop Add-On for Firefox, and you can choose the option that works for you. I entered the ID on my desktop by choosing to send it to it to my mail and then copying and pasting in Firefox itself. We will go into the details of the Extension setup a bit later.

And, the Android app also has a Settings menu (2nd Screenshot) wherein you can set the default sharing apps for URLs and Images that are received from your Desktop Firefox.

Set up Sendroid Firefox Add-On on your PC

Sendroid Firefox Extension is easy to set up and requires almost no effort whatsoever. You just need to click on the Sendroid Settings icon on the main toolbar, and enter the Registration ID generated by the Android app. 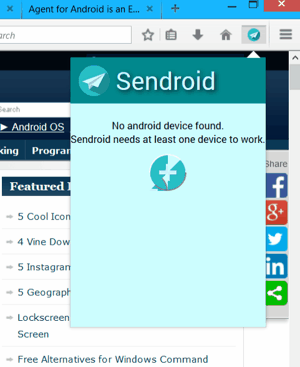 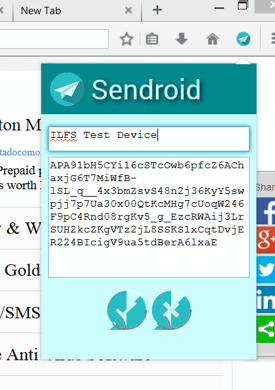 Once this is done, you can see all the added Android devices right there. You can add up to 4 Android devices to Sendroid Add-On for Firefox. Every device will have its unique registration ID and will have to be added in a similar way.

How to send URLs and Images From Desktop Firefox to Android?

When the setup is complete, the extension will add a Send to Android option to the Right-click context menu. If you want to send the web address of the page you are currently browsing, you just need to Right-click in an empty area and select Send to Android -> Your Device Name (which you added). You can send images from webpages to your Android device in exactly similar way except that you have to hover your mouse cursor over the image before you right-click. (look at the screenshot up top in this post. It shows the context menu)

And almost instantly, you will receive a notification on your Android device. This notification also has quick-action buttons in it. These buttons can be used to copy the URL link to your Phone’s clipboard, or open it using a browser. This is shown in the screenshot below. 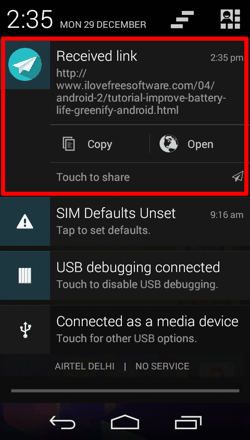 If you send an image, it can be either shared (using any of the apps installed on your Android device; like Whatsapp, Hangouts, Facebook Messenger, etc.), opened (with a browser), or downloaded directly.

Where Sendroid really shines above other such add-ons and apps, is its ease of use and equally simplistic set up. There is no complex syncing mechanism, or any other such frills whatsoever. The Android app just works like a receiver and hence no complexities are involved. Personally, I would still prefer PushBullet, as that is much more feature rich and gives lot more options. Also there was one frequent issue I encountered which didn’t allow me to download the images directly from the quick-action button in the received notification. Sometimes the download ran endlessly and the notification stayed persistently in the notification bar. Every other aspect of the app worked flawlessly. The Firefox Add-On and the Android app, both are available for free over on the Mozilla Add-Ons Store and the Google Play Store respectively.

Get Sendroid app for Android.