Monster Avoid is a free Windows 8 survival game app. It’s a simple Windows 8 game app where you have to avoid different monsters and survive as long as you can while eating the stars that appear randomly in the game. The game sure is addictive and has a really good concept, because it is your ultimate faith that you’ll die in the game, and in a way you yourself are responsible for your death. Sound’s dubious right? This is one of the fact that makes this Windows 8 survival game app fun. 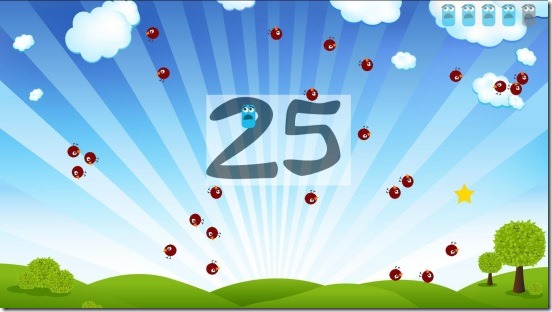 The game is supported in all Windows 8 devices, and is equally fun in touch and non touch devices. The good thing is that the game doesn’t need internet connection to run. So, you can play this game anytime and wherever you want.

The gameplay of this Windows 8 game app sure is fun and gets challenging as you stay longer in the game. The game has just one level. You’ll be playing in this level only. You’ll get a blue colored creature, whom you can move by simply clicking on him and dragging here and there in the screen. At first you see nothing except you (the character) and a Yellow star at some corner of the screen. All you have to do is click-drag the character towards the star, so that he can eat it. But! the moment you eat the star, a twist pops up. Out of the star you ate, a red colored monster appears in the screen, and that monster starts moving in the screen. Good thing is the monster always follow a path that he moved upon first. 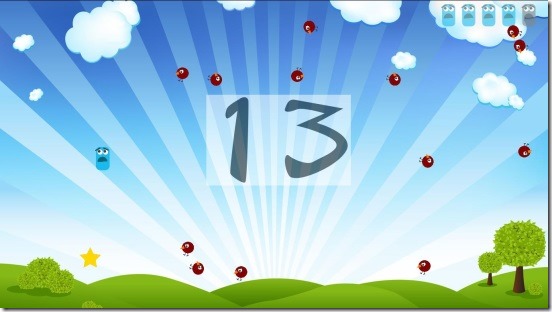 When all these things are happening on the screen, a second star pops up in the screen at some another random place. All you have to do is find it and eat it. Once you eat the second star, a new monster pops up again, and this continues till the time you stay alive in the game and eat a new star. That is on eating a new start every time, a new monster appears in the screen. So, there will be a time in the game when you’ll have the whole screen filled with monsters. To help you stay longer in the game, the app has 5 lives. Every time you get touched by a monster, your life gets reduced by one life.  All you have to do is keep avoiding these monsters and eat the stars. For every star you eat, your score gets increased by 1 point. So the objective is to eat as many stars as you can while staying alive. 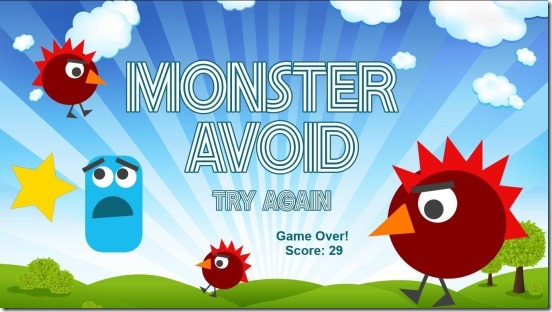 Here are some good similar Windows 8 game apps; you might want to try them: Cockroach Hunter, Escapa+, and FleshBlender.

Monster Avoid certainly is a good Windows 8 survival game app. It’s simple follow the rules but not that easy to play the game. I liked the later parts of the game because, it’s the time when you have to watch everywhere and follow the movements of every single monster. A good game with new and refreshing concept.