Escapa+ is a free Windows 8 survival game app. It’s a very simple game where you have to stay the longest in the game. The game is all based on the time factor.

The gameplay of this Windows 8 game app is quite simple. As the name of the game is Escapa+, you have to escape (dodge) from the other four moving boxes in the game screen. That is you have to avoid colliding with any of these four boxes along with staying away from the edges of the playing area. The longer you managed to stay in the game the higher the score gets. In the screenshot below, you are the Maroon colored box on left side. 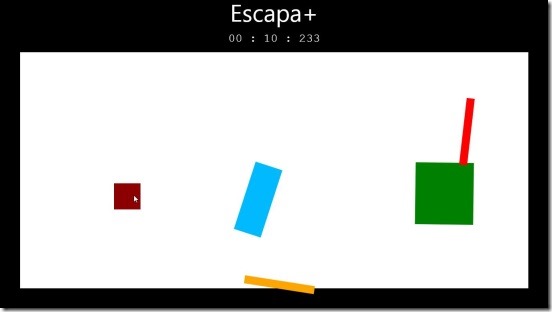 The game also consists of a world leader board, which shows the top 65 scores in the game. So, you can either play to break your own highest score or to get in the top of world leaderboard.

The game does comes with a fresh concept, and that is avoiding everything that’s on the screen. You don’t just have to avoid the other 4 boxes, but also stay away from the edges of the playing area. If you touch anything in the game, the game ends very moment. There’s too much to avoid in the game. And that is what that makes the game challenging. In the game all you have to do is move the Maroon colored square box using the mouse click and drag, and avoid anything that’s coming towards you, and also the boundaries of playing area. 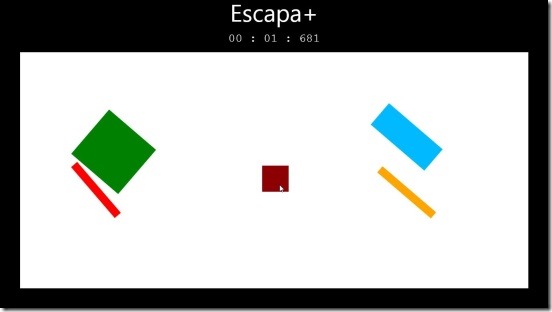 The moment you click-drag the maroon colored box, the game starts, and the other 4 boxes, start moving and rotating freely. They collide with each other and the boundaries of playing area, and then bounce back. There’s no pattern of their movement. They just move randomly and that is what makes the game fun. The game records the survival time of every game that you play, and saves the one time which is your all time best. It then shows that time to you at the end of every game, reminding you of the target to achieve. 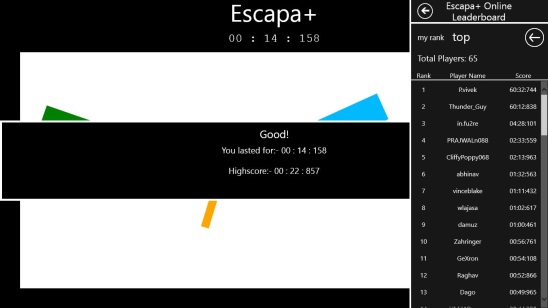 Simply avoid touching or getting touched by anything present on the screen and score your all time best timing.

Escapa+ sure is a fun Windows 8 survival game app. It has got a good gameplay. Nothing is too complicated with twists or rules. This is a game for those users who don’t go for the graphics but go for the gameplay. The graphics are really simple, but with good simulation and easy controls. All in all a good free game app.