Llama Music Cleanser is a free cleanup utility for your music collection with the help of which you can find and delete songs that you rarely listen to, or songs which you don’t listen at all. There’s always music that you have stored on your hard drive which isn’t played very often, which you don’t enjoy listening to, but you just haven’t had the time to remove them from your collection. Llama Music Cleanser can help you with that.

Screenshot above shows us the default interface of this free music playlist cleaner. This is a portable application, which means that you can use it from a USB flash drive, there’s no need for installation. It’s also Java based, so make sure that you have the latest Java runtime environment installed before using it. Llama Music Cleanser works in sync with media players, iTunes, Winamp, Zune and Windows Media Player, you can play songs, and as they are being played, mark them as either good or bad. Key features of this free playlist cleaner are:

People with large music collections are more than aware of the situation that we mentioned in the introduction, of having songs that we rarely listen to. You might say that this isn’t really that big of a deal, but they do take up disk space. If you don’t have a lot of it, by cleaning up your library you could save yourself from spending money on a new hard drive, or at the very least end up having only the songs you’re interested in listening inside your music collection.

Open up one of the supported media player, which you hopefully are using, if not, you’re gonna have to install it and start playing the playlist that you’d like to clean. Leave it running, open up Llama Music Cleanser and there click on File >> Select Media Player, 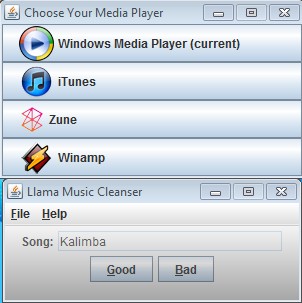 If you want to start editing music collection directory directly, select File >> Select Directory. After that click on File >> Start Cleaning. Songs from the selected directory should start playing, and as you’re switching through them, select either Good, for the song that you’d like to keep and once that a song which you don’t particularly like comes up, select Bad. 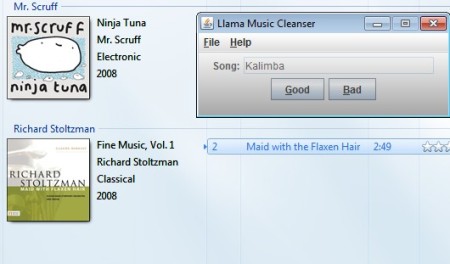 Llama Music Cleanser is a very useful utility which is gonna help you get your music collection in order in no time. A bit of a drawback that we found is that the songs which are marked as Bad will be deleted right away, they are not sent to the Recycle Bin, so be careful when you’re deleting, because the songs that you delete can’t be easily recovered. Free download.