In this Super Mario War you have to stomp others and avoid being stomped. You can play with up to three others human players or computer bots in different maps and modes. You can edit your own level also to play this multiplayer game. 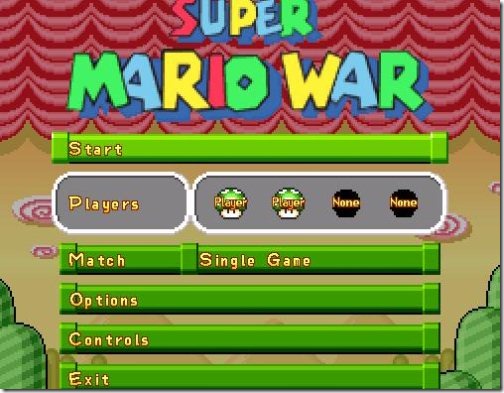 About Super Mario War for PC:

As soon as you open the Super Mario War game, you will see a screen like the one shown in above screenshot. Move to the Players option with your down arrow key (you can’t use your mouse anymore). Press enter and use your arrow keys to set the players among the four options. You can keep player or bot or none and after you are done press enter again. In Match option there are several matches like: single player, tournaments, yoshi’s land, etc. In options menu you can change: gameplay, team, item selection, item settings, weapons, projectiles, graphics, sounds, and refresh maps options. In control menu you can change the controls of first, second, third, and fourth player or just have a look at them to avoid confusion. Choose Start option after you are all set for the war. Then all the four players will be asked to choose their colors from: Red, Green, Yellow, and Blue. You can also press up and down arrow to change your character’s look. Then press enter to choose maps and modes as shown in below screenshot. 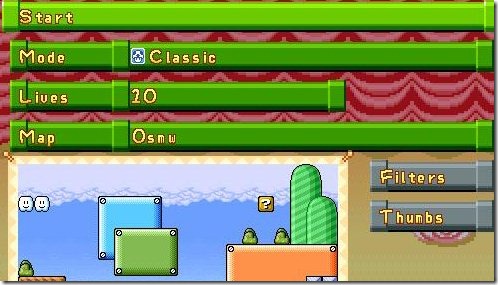 Now in this window you can choose various modes like: Classic, frag limit, time limit, jail, coins collection, and much more. There are various modes available. Then you can also edit the number of lives to unlimited also starting from five. You can choose any map of your choice as a preview will be available below. There are many maps to select from and you can edit various other settings of the map in filters menu. Then choose start option to play the game and have fun stomping others and win the game.

Now let’s see about the level editor option, you can find it in the download folder. The software is named Leveleditor. Click on it and start editing the levels; for any help press [H] key to find help. You change already existing maps or make new maps. 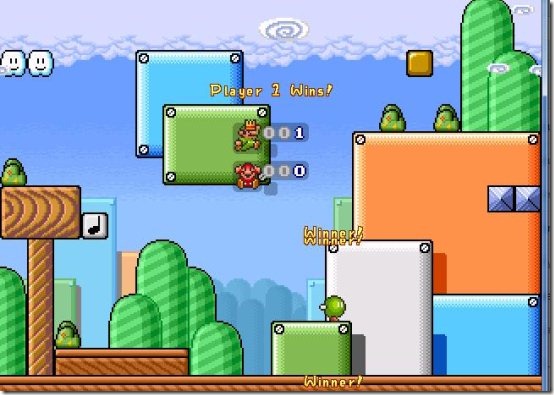 Super Mario War is fun for Mario fans and multiplayer gamers who wants to play with their friends on the same computer. The graphics are same and sound effects are little different because there are no dragons or bugs around. You can read about other Mario games like: Mario Forever and Mari0 (Mario with portal).