Here’s a list of 4 memory monitor extensions for Google Chrome which you can use to view memory usage of Chrome from within the Chrome’s toolbar. Lately Chrome became more memory hungry. People are reporting that more and more RAM is being used, depending on how much tabs are active and extensions installed. High memory usage can slow down the computer and even crash it entirely. With the memory monitor extensions from the list down below, you’ll be able to view how much free memory your system has, see detailed breakdown of which tabs/extensions use the most and more.

Memory Monitor by Daniel keeps track of free memory that your system has available. It does this using the top right corner icon. 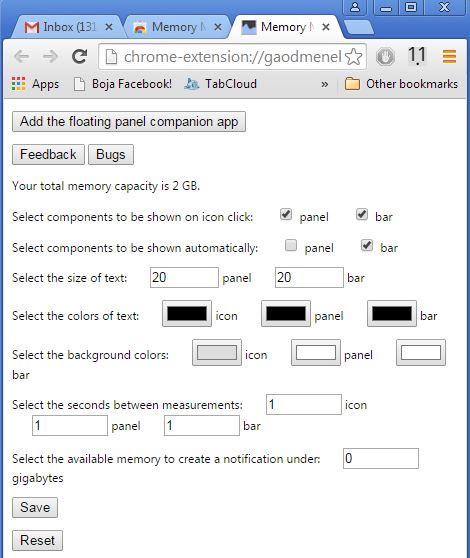 Icon shows the amount of available RAM in real time (in GB). Available memory measurements are performed every second by default, but this number can be changed by opening up the extension settings. Other stuff like icon colors are also configurable in the extension settings. Mouse pointer hover over the icon gives more details like total RAM available.

Get Memory Monitor by Daniel Herr.

Task Manager is a memory monitor extension for Chrome that goes into much more detail about memory usage. 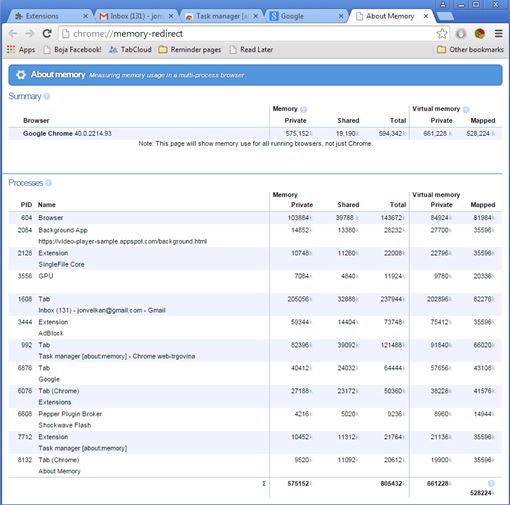 It also adds a top right corner icon, only here a click on the icon opens up something similar to the Windows Task Manager. This is actually a built-in Chrome page for viewing memory usage. Task Manager is a nice frontend for it. Here you can find breakdown of memory usage on extensions, tabs and general browser activity, to see what’s taking up most RAM.

Also have a look at Unload Tabs For Google Chrome To Reduce Memory Usage.

Memory Monitor by pd4d10 is a basically like Memory Monitor by by Daniel Herr, only here the top right corner icon shows a graphical “usage bar” to show the amount of available/used memory. 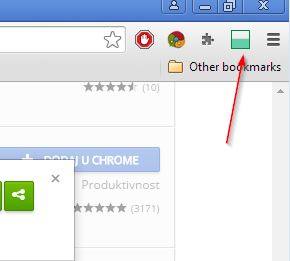 The fuller the indicator is, the more memory is being used. There aren’t any extension settings available for tweaking colors, only green is available. Values are checked constantly, in real time. Hover your mouse pointer over the extension icon for actual memory usage values.

Get Memory Monitor by pd4d10. 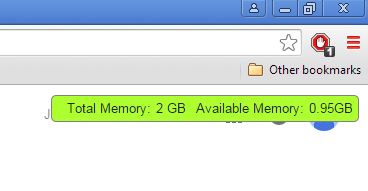 Instead of having to use icons and mouse hovers to check memory usage, this memory monitor uses a keyboard shortcut. By default it’s Alt+Shift+M. Pressing that key combo opens up a small notification with a green background where requested info (total available and free memory) are showed.

Get Memory Monitor by Dan.

Also have a look at Reduce Chrome Memory Usage With One Tab.

Out of the 4 memory monitor extensions from the list above, the one I suggest you should tryout first is Task Manager followed by Memory Monitor by Dan. Task Manager gives a detailed overview over memory usage and Memory Monitor the most non-intrusive, only the fly, keyboard activated checkup of memory usage. Let me know what you think by leaving a comment down below.