This write-up talks about 5 best DNS changer software for Windows 10. Changing DNS (Domain Name System) settings has a lot of benefits. It can lead to increased speeds, as third party DNS servers can be faster than your ISP’s DNS servers. Apart from that, it can also come in handy for accessing blocked websites, and leads to generally improved browsing experience. And of course, then there are features like parental controls, phishing protection, and stuff like that. But the question is, which DNS changer software to use, given that there are so many of them out there?

Not a problem, as that’s what this article is meant to help you decide. These DNS changer applications are easy to use, and include features like automatic network adapter detection, multiple built-in DNS server configurations, and then some more. Intrigued? Let’s find out more about 5 best DNS changer software for Windows 10.

Lightweight and easy to use, DNS Jumper is a feature laden application that lets you tweak your system’s DNS settings like a pro. The single window UI is pretty straightforward, and makes working with the application a walk in the park. To get started, first select the network adapter that’s currently in use. After that, you can choose from over 30 DNS server configurations that it comes with. If you want, you can click the gear icon to advanced DNS options, and the Manual DNS Server option makes it easy to configure everything, well, manually. Once everything is set and done, click on the Apply DNS button on the left to effect the changes. DNS Jumper can automatically choose the fastest DNS server, and even lets you flush the existing DNS cache to correct any errors. Find out more here. 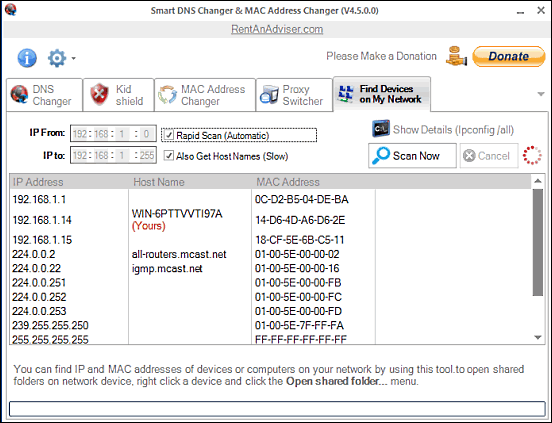 It may not have the most user friendly UI out there, but once you get past it, Smart DNS Changer is actually a pretty good application for tinkering with your system’s DNS settings. You can either have the program configure DNS settings automatically, or choose from a list of included DNS server configurations. For correcting the errors, Smart DNS Changer includes the option of clearing the existing DNS settings. The MAC Address Changer tab can even generate a random MAC address. Manual DNS server settings can be configured for both IPv4 and IPv6 addresses. The application can also scan for other devices on the network, and return information such as Hostname, MAC addresses, and IP addresses about them. 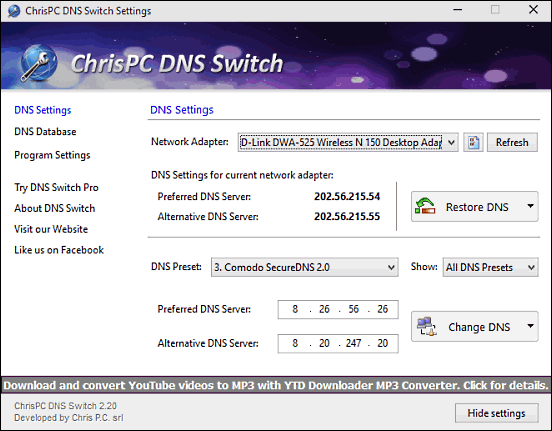 On the lookout for a powerful DNS changer application for Windows 10? Look no further than DNS Switch. Packing in a healthy selection of features, DNS Switch is fairly easy to get started with. When run for the first time after installation, it automatically detects the network adapter currently being used to connect to the network, and also displays the preferred and alternative DNS server addresses for the same. All you have to do is go to the DNS Preset option, and use the drop down menu to select one of the 30+ server presets included with the application. You can also change the preferred and alternative DNS servers manually. Once done, click the Change DNS button to apply the changes. DNS Switch can also clear the DNS cache automatically every time the DNS is changed. Click here to know more. 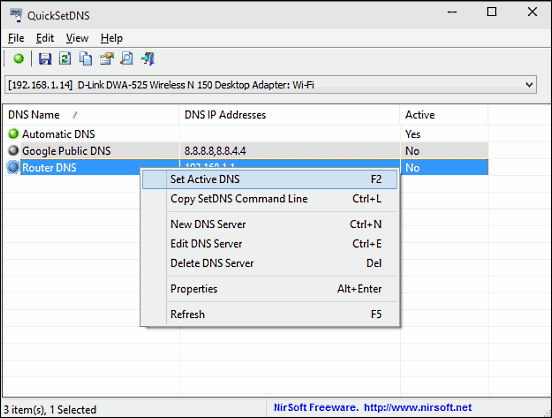 It’s amazing how light an application can get, and still manage to pack in quite a bunch of functionality. But that’s exactly what QuickSetDNS is. At just 85 KB in size, it’s probably the lightest DNS changer application out there. And the fact that it’s available as a portable application sweetens the even more. Although it doesn’t include a whole truckload of goodies like numerous DNS server presets, but QuickSetDNS more than makes up for it with its ease of use. The UI is as simple as it can get, and lists three DNS servers (Automatic, Google Public, and Router). To set one of these as active, simply right click on it, and select the Set Active DNS option. Not only that, you can use the Edit option to manually specify the settings such as name and IP addresses. QuickSetDNS also makes it easy to export the listing of DNS servers as HTML report, which can be viewed in any web browser. To know more, click here. 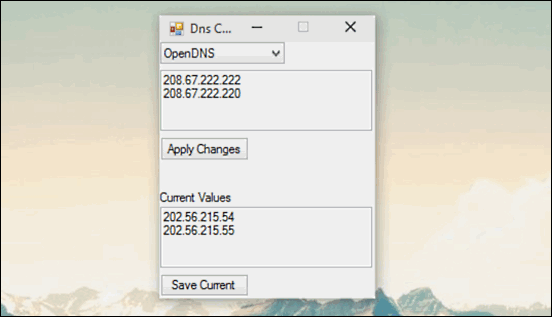 Not interested in digging through a bunch of options, and just want a simple application that lets you change system DNS settings? DNS Changer is what you need. It’s exactly what it says on the box, and lets you tweak DNS settings in mere seconds. Although the UI is extremely minimal (and even a tad small), but it works for what it is. DNS Changer includes a bunch of DNS configurations, such as Google, OpenDNS and FoolDNS. However, you can also specify these settings manually if you want. Once done, simply click on the Apply Changes button to, well, apply the changes. DNS changer also lets you save current DNS values, which can be restored in case the changed settings lead to unintentional behavior.

The above discussed applications are perfect for changing your computer’s DNS settings. Take them for a spin, and let me know your thoughts in the comments below.