Tower of Hanoi Jogatina is a free puzzle game for Android that you can play to challenge the mind. You will need to use mind skills in order to arrange all the disks from the first spot to the last spot in the same order, and that too, without being able to place a larger disk on a smaller one.

Tower of Hanoi Game for Android is one of the most interesting games I have played. The game has eight levels and you have to complete each level as fast as possible. So, download the game to check problem solving power of your brain. 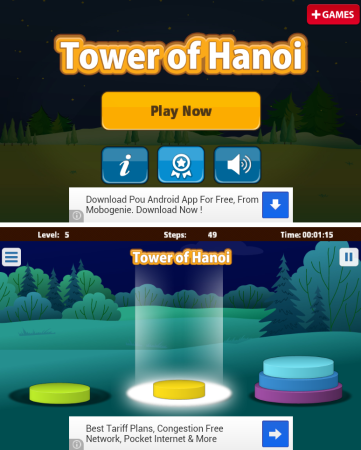 Key Features of this Tower of Hanoi Game for Android:

If you have Windows 8, then you can play Towers of Hanoi on Windows 8 devices, too.

How to Play Tower of Hanoi Jogatina:

You can download Tower of Hanoi game for Android by using the Google play store link or QR code given at the end of this review. After the installation is completed, tap the icon of the app to launch it on your Android device. 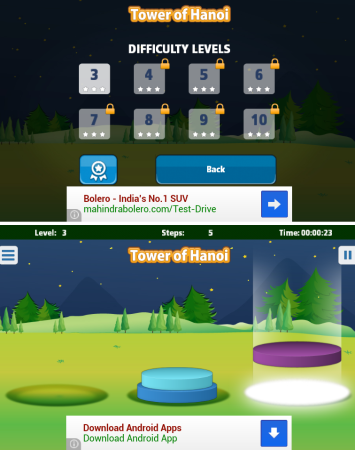 Three round spots will appear on the screen. The first spot will have the disks (say 3 disks). these are arranged in a way that the biggest is at the bottom and smallest at the top.

Your goal is to bring the whole stack of disks to the third round spot in the same order. To move a disk simply drag it and drop it to another spot.

Few things to keep in mind:

You can also play other interesting games on Android like: Escape  Action, Dragon Guild Battle Combat, reviewed earlier on our website.

Tower of Hanoi Game for Android is a great fun game to pass time. It challenges our mind and makes it sharp. I love playing this game, also because the scenes depicted in the app are so beautiful. Play the game and see how fast you can complete it.

Get Tower of Hanoi Jogatina here or use the QR code given below.