Google Chrome 64-bit Beta has just been launched for Windows. Announced just hours ago via an official blog post on the Google Chrome releases blog, the 64-bit beta variant of Google’s browser is supposed to bring a lot of performance enhancing features to the table for regular as well as power users (more stability, less frequent crashes, better tab process memory allocation etc.). In general, this should essentially translate into an overall smoother browsing experience for users with 64-bit machines. But perhaps the biggest advantage is the fact that with this beta release, Google Chrome can now use more than 4 GB of RAM (32 bit applications can’t address more than 4 GB of system memory). Interested to know more? Keep reading folks! 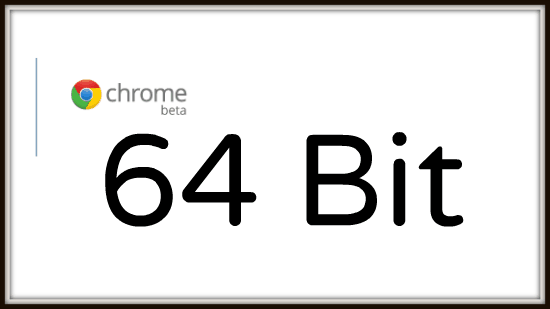 Nearly two months after it was announced on the Dev and Canary release channels, the 64-bit iteration of Google Chrome has been finally released on the Beta release channel. The availability of the 64-bit build on the Beta channel was announced just hours ago, via an official blog post on the Chrome releases blog. Although just like any other Beta software, bugs and hiccups are to be expected in this release, but this also means that Google Chrome can now use more than 4 GB of system memory. This means that the future stable 64-bit builds can be expected to run more smoothly, with better memory optimization, and overall general stability.

Why Would You Want To Use 64-bit Google Chrome?

Although it’s a known fact that 32-bit applications can run on systems with 64-bit architecture just fine (however, the converse isn’t true!), and probably the average user probably won’t even bother. But there are a few reasons why you might want to use 64-bit version of Google Chrome. Here’s a lowdown:

How To Get The 64-bit Beta Version Of Google Chrome?

Note: Even if you have a stable build of Google Chrome already installed on your system, you can safely go ahead and download & install the beta version. Although the beta version will replace the version installed previously, it will automatically preserve (and migrate) your old browser settings, extensions, bookmarks and things like that.

The release of the 64-bit Beta version of Google Chrome for Windows is a really nice step ahead in the right direction. Google’s Chrome is a great browser as such, but it has been notoriously associated with crashes, minor chinks here and there, and things like that. The Beta release of the 64-bit version indicates that Google Chrome is on the right way on becoming an even better browser than it already is.

Have you tried Google Chrome 64-bit beta yet? Do let me know in the comments below.