This tutorial is about how to preview songs on SoundCloud without playing them on Chrome. You can now listen to a short preview of all songs on SoundCloud without even opening them. This can be done using a free extension for Chrome browser called, “Quick Preview for SoundCloud“. After installing the extension, whenever you will hover the mouse cursor over the “Play” button on any SoundCloud song, it will automatically start playing a preview of the song in four small parts. The best thing is that the current song which you’re listening to doesn’t need to be stopped.

Sometimes, you might come across a new or interesting track on SoundCloud which you want to listen a little, but at the same time you don’t want to interrupt what you’re currently listening. Well, then the only option you had was to either stop the current track and play the new track, or open SoundCloud on another browser or incognito tab. But, this Chrome extension lets you easily preview songs on SoundCloud without actually playing them. 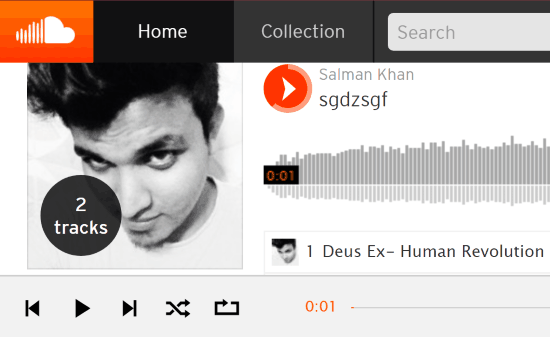 We have also reviewed another Chrome extension named, “Peek” which allows you to preview documents, videos, etc. before downloading them.

How to Preview Songs on SoundCloud Without Playing Them on Chrome:

To get started, simply install the “Quick Preview for SoundCloud” extension on your Chrome browser. For this, go to this page and click on the “Add to Chrome” button.

After that, an extension icon will be visible on the toolbar of the browser. When you see the icon, you don’t need to do any more configuration to make this extension work, as it will be automatically activated.

To preview songs on SoundCloud, simply open up your SoundCloud account. After that, browse any album or playlist you want and then you will see the ‘Play” button associated with each song. Now, what you need to do is just hover the mouse cursor over the “Play” button. As soon as you do that, it will start playing a preview sample of the song. The preview plays 4 different sample from the entire songs. 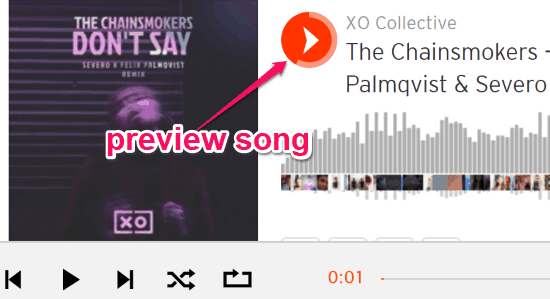 If you’re already listening to any song on SoundCloud, then when you hover the mouse cursor it will be paused temporarily as the preview will be played. But, when you move your cursor away, the song will automatically continue.

Quick Preview for SoundCloud is a pretty useful extension for Chrome if you just want to listen small parts of a song without stopping the current song. Personally, I like this extension as all you got to do is install it and the rest is taken care of. Now, you can listen to short samples of any songs you want on SoundCloud.