Sending voice messages on WhatsApp is very common. But what happens is when you record a voice message by holding the record button, it will be sent immediately when you release it. This paradigm eliminates any chances to review the message in case you sent something you shouldn’t have.

To address, this problem, the new update of WhatsApp brings voice message drafts. You can now record a voice message as usually, but it will not send it when you stop recording. It now lets you replace the message you have recorded and if something goes wrong then you can discard the recording and start again.

How to Preview Voice Message on WhatsApp Before Sending?

Now, you open a chat and then record the voice message as usually. But when you start recording then it will show you the lock icon and you can just drag your thumb and enable it and start recording.

Now, you can remove your thumb from the record button, and you will see that the message will not be sent. You can listen to it and even delete if you want to. It will show you a delete button that you can use to discard a voice message. 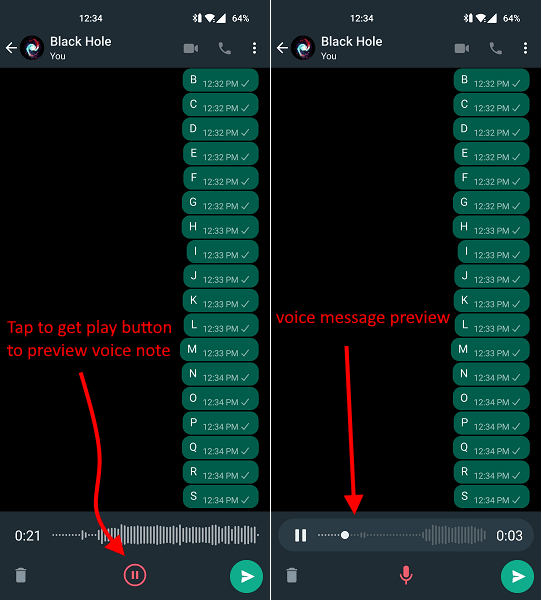 In this way, you can now preview voice messages right before sending them on WhatsApp. You will not have to resort to delete for everyone feature in order to take back a voice note. Just record it, preview it, and only send it if everything is right. And not just this drafting feature but voice message has got other updates as well. For example, you can now pause a recording, fast forward it, or even play it outside of the chat.

If you have been embarrassed by sending improper voice notes on WhatsApp, then you can now prevent that. I liked the fact that Meta decided to add this voice note drafting feature by default. So, record as many voice messages as you want and discard them if they were not recorded properly. You can try it on Android as well as iOS version of WhatsApp right now.