So, if you looking for lightweight alternatives to the Twitter app, here are 5 apps that offer similar functions but use a very little of your Android resources and storage space. In fact, some of them even support multiple Twitter accounts and some even let you use both Facebook and Twitter. Meanwhile, you can also check out Twitter widgets for Android by which you can access Twitter right from homescreen. 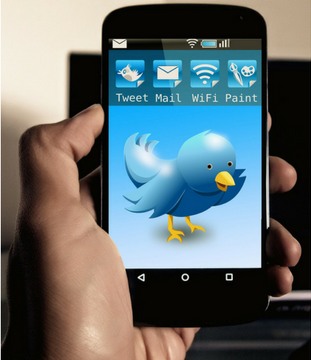 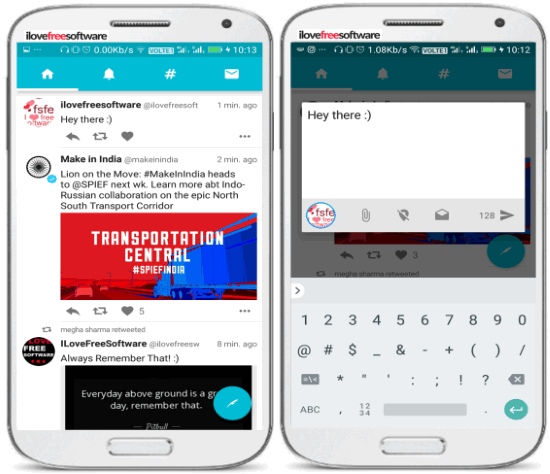 I really liked the GIF feature, as I could search GIFs on Giphy and tweet them quite easily right from its interface. Another unique feature of this app is that you can save the tweets as drafts and post them later. Tap on the floating button at the bottom-right of its interface to open the dialog box from which you can compose a tweet. Tap on the link button to add photos, videos, or GIFs from Giphy to your tweet. If you want to save it as a draft then press the back button of your phone and choose to save it as a draft. You can then post it anytime you want. The pro version of the app gives you the option to schedule tweets by Buffer app. In addition to this, it supports multiple Twitter accounts and lets you apply filters to block Tweets from your Tweets feed. The best part is that it just blocks the tweets and not the user itself. So, this feature is quite handy if you want to hide tweets of a specific user without blocking him. You can also specify keywords, sources, and links to filter tweets from your feed. The best of all the app just takes 13 MB of storage space which is very less as compared to the storage occupied by the official Twitter app. 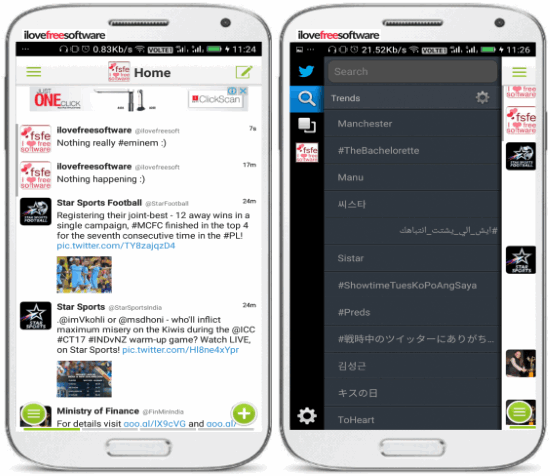 Janetter for Twitter is another free lite Twitter app for Android. This app is even lighter as compared to the first app on my list as it just took around 6 MB on my phone storage. With this app, you can see your tweets feed, mentions feed, direct messages, and lists. You can also post tweets and add photos to tweet. To post tweets, tap on the Compose button at the top-right of its interface. After that, you can write the tweet and add photos, hashtags, etc to it. It also lets you save tweets as drafts that you can post afterward. The app comes with an easy to use and configurable interface. You can bookmark various types of screens i.e. Home, Mentions, Messages, and specific Lists to access with just a swipe on the main screen of the app. Just like the previous Twitter-lite Android app on my list, it also supports multiple accounts. If you want to add another account, then go to Settings>>Accounts from the app menu. 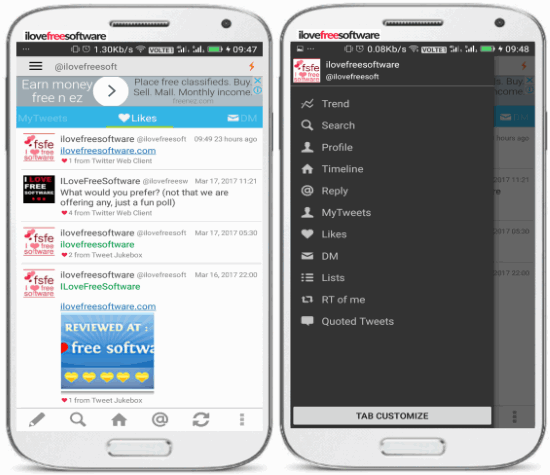 TwitPane is another free lite Twitter app on my list. It will just take around 8 MB of your phone storage to let you use Twitter flawlessly. On this app, you can access your Twitter profile, post tweets, post photo tweets, read tweets feed, mentions, direct messages, lists, replies, etc. It also comes with support for multiple accounts which allows you to quickly switch between them to view newer tweets without having to log out again and again. The interface makes the Twitter experience even better. The app menu lets you quickly switch between different Twitter tabs to see the latest trends, tweets of your following and followers, profile, likes, direct messages, quoted tweets, etc. Tap on the menu button at the top-left part to bring forth app menu and then switch to its different parts. For greater accessibility, there is a Refresh button to quickly get newer content from Twitter. If you want to add another Twitter account, then tap on the “3-dots” button at the bottom-right and select “Accounts”. After that, tap on the “Add account” option and then login with your Twitter account to add it. 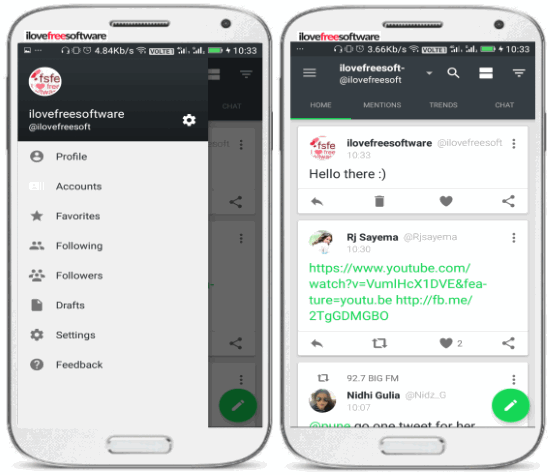 Finch is another free lightweight Twitter app for Android. Out of all other lite Twitter Android apps on my list, I really liked its material design interface that most. It is quite smooth and responsive. Well, you can use it in the same manner as other lite Twitter apps. It lets you post tweets, photo tweets, save tweets as drafts, access Twitter timeline, lists, direct messages, following, followers, etc. The main interface of the app lets you quickly switch between different tabs to see tweets feed, mentions, trends, and direct messages. In addition to that, you can add multiple Twitter accounts too and quickly switch between them to access Twitter. It also provides a filter option to hide tweets from specific users. In terms of storage used, it takes up a little extra space as compared to Twitpane i.e. 18 MB. Still, it is very less if I compare it to official Twitter Android app.

Read the detailed review of Finch. 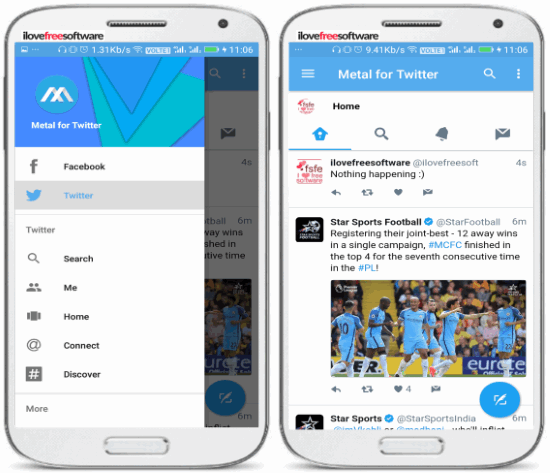