This post lists some best free PSD to SVG converter software for Windows. Software I have added here take a single or multiple PSD files from you and create the output SVG file. They analyze each layer in the PSD file thoroughly and then created then final SVG file. Some of them even convert the text and image elements to SVG paths while some of them leave them as it is. But that doesn’t erodes the output file. I have added a couple of command line tools as well that you can use to convert PSD to SVG by running a single command.

If you have a Photoshop file that you want to convert to SVG then tool listed in this post will help you. Even though, Photoshop comes with a built-in option to export as SVG. But in case, you don’t hae Photoshop and don’t want to setup that on your PC then you can use tools mentioned here. Most of them are lightweight tools that you can install in a few minutes and then use them to convert Photos Shop files to scalable vector graphics. 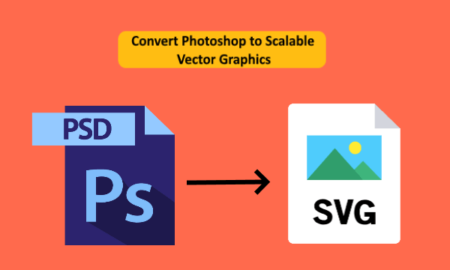 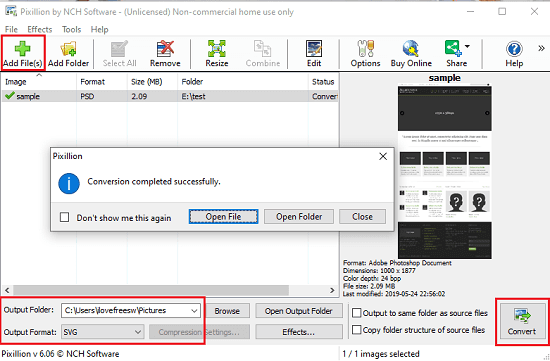 Pixillion Image Converter Software is a free software or Windows that you can use to batch convert Photoshop files to SVG. This software is only free for home use so don’t violate that licence by using for commercial purpose. This is a universal image converter software for Windows that supports a lot of image file formats to convert images between different formats.

Conversions like TIFF to JPG, Webp to PNG, etc., can be carried out with this easily. And luckily, it supports Adobe Photoshop files so you can use that feature for the PSD to SVG conversion. And the best part about this software is that it supports batch processing. 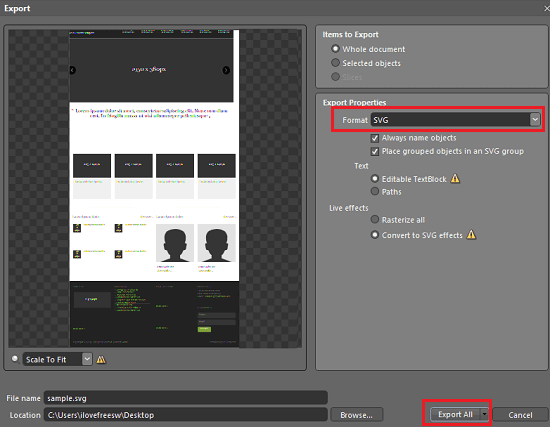 Microsoft Expression Design 4 is another free software that can be used for PSD to SVG conversion. This is a graphics manipulation software that you can use to manipulate different kind of images it supports almost all image types and you can edit them and export them as other type of images. It supports PSD files and you can easily export any PSD file as SVG with this software. And the best part is that you can either export the whole PSD file as SVG or you can export any selected object.

You can download the free version of this software from Microsoft using the above link. Install it and then open it up. Next, open the PSD file you want to convert to SVG with this. You can see tat it will automatically identify different layers and show you the preview of PSD file. If you want to make some edits then you can do that.

To export the PSD file as SVG, you use the File > Export option. It will open a new window where you specify the options to customize the final SVG file. You can specify whether you want to export selected object or the whole file. You can opt to rasterize the effects or convert them to paths. In the end, hit “Export All” button and it will save the SVG corresponding to the input PSD in the destination folder.

To use this too, you need to have Node,js installed. After that, you follow these steps.

Step 1: Open terminal or command prompt and then you simply enter the following command. It will install Node Psd to Svg in your PC and when this command finishes successfully, you will be able to use it.

Step 2: CD into the folder where you have the PSD file that you want to convert. Next, you run the following command and wait for the command to finish. It will read the input file and will create corresponding SVG file in same folder. 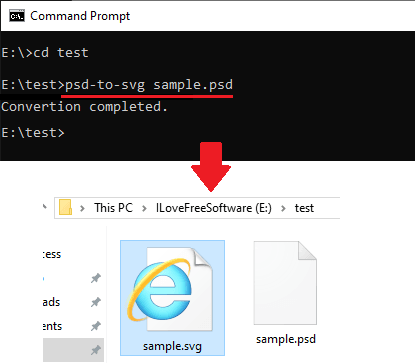 Above you can see the how this command line tool works. The above command was for converting a single PSD file to SVG. If you have knowledge of batch files then you can use the command to convert multiple PSD files to SVG.

Psd2Svg is another free command line tool that you can use for PSD to SVG conversion. Here this is a tool written in Python just like the above tool, it can convert any given PSD file to SVG. The conversion is perfect but I noticed that in the output SVG file, it doesn’t convert the images to SVG paths. In my case, the images were encoded in to Base64 in he final SVG file. There is a single command to use this tool and the convert the PSD file. Apart from as a command line tool, you can use it as an API as well for your web and desktop applications.

Here are the steps for using this tool to convert any given PSD file to vector graphics. Before starting, make sure that you have Python installed. For this post, I will be using this on Windows 10.

Step 1: Open command prompt with admin rights and then run this command. It will install Psd2Svg and then you will be able to start using it. 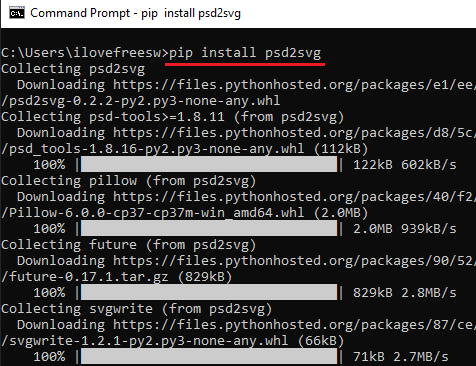 Step 2: Now, CD in to the directory where you have the input PSD file. Next, just run the following command in the specified syntax and then it will start analyzing the PSD file. When it is done, it will save corresponding SVG file in the current folder. 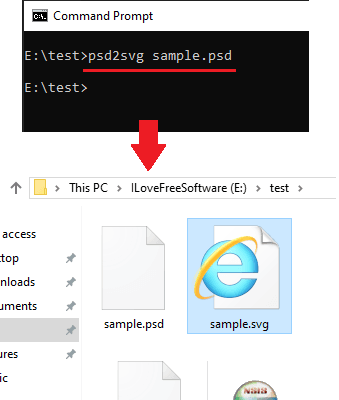 Above, you can see how this tool works to convert PSD to SVG. If you want to use it to convert multiple PSD files to SVG then you can do that. Just create a batch file with the above command then execute that whenever you want to.

These are the best free software for Windows you can use to quickly convert PSD to SVG. And if you want to convert multiple PSD files then you can do that as some software above support batch processing directly and indirectly. So, if you are looking for some free PSD to SVG converters then this post will be helpful. If you want a simple and straightforward software that you can use Pixillion and Microsoft Expression Design. If you are comfortable with command line tools then you can use them as well.