FKill is a free command line tool to kill process by name, PID, port number. This is a cross platform tool to terminate running process using an interactive interface. Here you can terminate a process by providing its name, port number at which its running or its PID. It can instantly terminate a process easily. And if the processes persists, then it can also terminate that by force. And you can do this by just running a simple command. Also, it offers an interactive command line interface where you can search a process by partially typing its name and then kill it. You can see the GIF that I have added below.

There are some process killer software already to kill processes immediately or kill a process at a schedule, but this tool, FKill is very powerful than all of them. And on top of that, it runs on multiple platforms in the same way. You just have to install it once and then you can always access it from the terminal or command prompt. Although you can terminate processes from Task Manager, if you want to try something powerful, then you can use FKill.

Here are some steps to use Fkill to kill process by name, PID port number.

Step 1: To install Fkill, you will need Node.js installed on your PC. And if you already have installed it then just run this command. This will install it and it will be all ready to use after this. 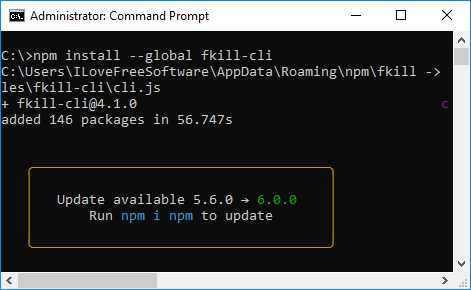 Step 2: Now, to start using this tool, you can use its basic command to start killing processes easily. You can see the syntax of the command below. 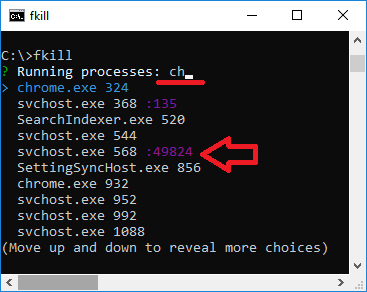 In this way, you can use this free command line tool to kill process by name, PID, and port number. And Fkill is a very powerful tool to do that. Just run a simple command to immediately terminate a process. Also, this tool supports terminating a process forcefully. So, in case a process is not terminating using the normal process, then it asks you to terminate that by force.