Update 2022: This iPhone app no longer exists now. We recommend you to try some other alternative instead.

Voicee is a free iPad app to send voice messages from iPad. This iPad Voicee app lets you send voice message between Voicee to Voicee users. The app is only available for iOS as of now. Any iOS user can now send unlimited voice messages for absolutely free. The app allows you to record the audio up to 1 minute. Also, the app allows you to send invitation to the contacts from your contact list on your iPad. You can add the contacts if you the know the email address from which you friends are registered with Voicee app. 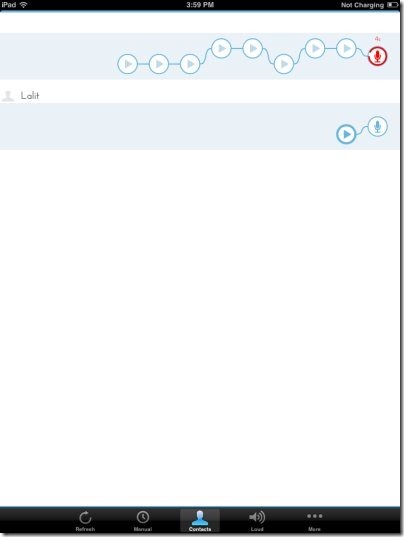 Another thing which I missed out in the app was identifying the Voicee users automatically from the contacts. The app only allows you to add the contacts manually by searching them with their email from which they have registered with Voicee. The only plus is that, you can send the invitation to your friends having iOS device. This way you can increase your Voicee friends and start sending the voice messages to them for free.

How to send voicemail from iPad?

Voicee is a nice iPad app with simple and easy to use interface. You just have to invite and add contacts in the app and get started. Just select the contact to which you want to send the voice message, record the audio, and send the message on the contact selected. Moreover, if you are recording the audio of exact 1 minute, then the app completes the recording and sends the voice message automatically to the contact selected.

You can check out Speak-A-Message software to send voice messages reviewed by us.

Also, check out the post by us on phonevite to send voice messages online.

Voicee provides a good solution for sending voice messages to your friends who are on iOS; whether iPad, iPhone, or iPod Touch.