The write-up discusses 5 best virtual desktop software for Windows 10. Thanks to the powerhouse multi-tasking beasts they are, we use our computers to handle a whole bunch of tasks together. For this reason, just about any desktop consists of a handful of open applications at a time. But it’s not exactly convenient, as switching between hordes of overlapping windows becomes quite a hassle.

But not to worry, as there are a number of virtual desktop applications that you can use to solve that problem. These applications not only let you create multiple (from four to unlimited) virtual workspaces, but also include features like hotkeys, per-desktop customization, password protection, and more. Sounds like something that can take your productivity to the next level? Let’s take an in-depth at 5 best virtual desktop software for Windows 10. 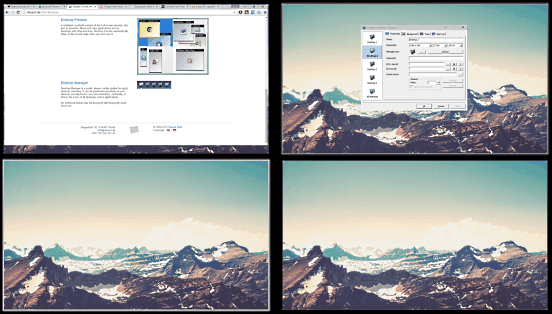 Easy to use and crammed with all sorts of goodness, Dexpot is a powerhouse virtual desktop software for Windows 10. It not only makes it incredibly simple to create multiple virtual desktops, but lets you customize just about everything about them as well. Dexpot supports up to 4 virtual desktops, more than sufficient for the needs of majority of users out there. It runs in the system tray, and you can use the context menu  to switch desktops, view a visual thumbnail based catalog of active applications and windows on the currently selected desktops, configure settings, and stuff like that. Not only that, the neat little Desktop Manager box at the bottom right corner lets you switch between desktops with one click. Dexpot is super customizable, and for each virtual desktop, you can specify options such as name, resolution, wallpaper, and even access password. What’s more, you can also choose to have desktop elements like icons hidden, and configure certain applications to automatically launch when you switch to a desktop. Find more here. 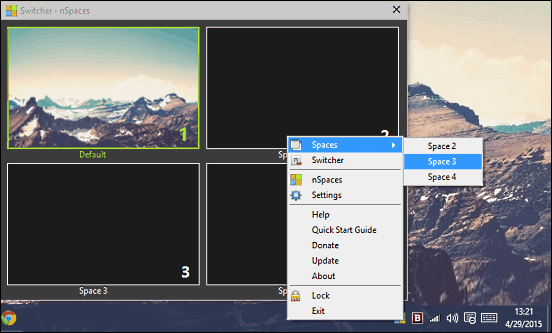 Looking for a simple yet robust virtual desktop software for Windows 10? nSpaces is all you need. The program is super to simple, and lets you have a maximum of 4 virtual desktops (called spaces) for all your productivity needs. Once installed, nSpaces runs in the system tray, and the context menu can be used to switch between spaces, access the visual switcher UI, configure settings, and things like that. For each of the virtual desktops, nSpaces let you have different background wallpaper for easier identification. Apart from that, you can also set custom keyboard shortcuts for switching amongst desktops, as well as for accessing the visual switcher. nSpaces even lets you specify a password for accessing it. Read here to find out more. 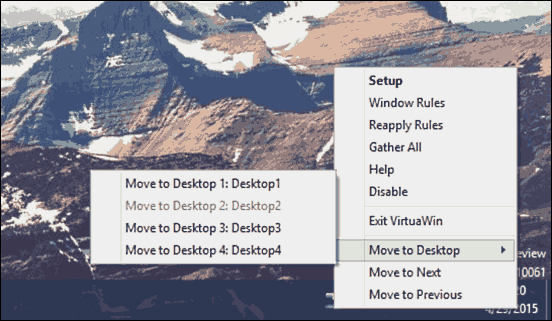 One of the best things about VirtuaWin is it diminutive size, but don’t let that fool you. It is one of the most feature laden virtual desktop software for Windows 10 out there. VirtuaWin lets you work with a maximum of 4 virtual desktops, calling them workspaces. Each of these workspaces (and their associated components) can be extensively customized, via the Setup option of the system tray context menu. Apart from that, you can easily cycle between the desktops using user-definable hotkeys. and the application’s tray icon indicates the desktop that’s currently active. VirtuaWin lets you tweak a lot of options, such as taskbar detections, window hooks, and automatic refresh after switching desktops. And of course, you can also move an application from one desktop to another by simple drag and drop operations. For more information, click here. 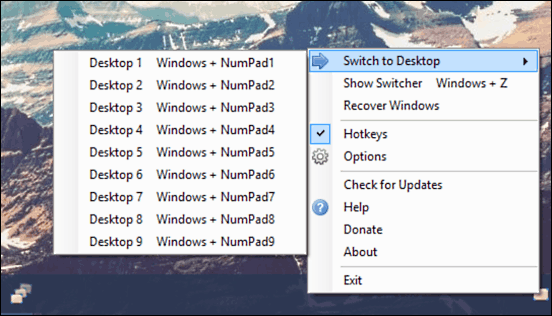 Nearly all the applications discussed so far support a maximum of 4 virtual desktops. And while that’s more than enough for just about everyone, there might be some power users who want even more. If you’re one of them, Finestra Virtual Desktops might just be the thing for you. Its standout feature is that it lets you create an unlimited number of virtual desktops. That’s right, you can simply specify the maximum number of workspaces in the application settings, and Finestra will take it from there. But that’s not all. Finestra Virtual Desktops features probably the easiest and fastest desktop switching mechanism ever, listing all the virtual desktops as a kind of jump list in the taskbar. Simply click on the application’s icon, and the listing of desktop will show up. Simply select the one you want to switch to, and you’re done. There are lots of customization options on-board too, and you can tweak everything from per-desktop wallpaper, to hotkeys, to switching animations. Visit here to know more. 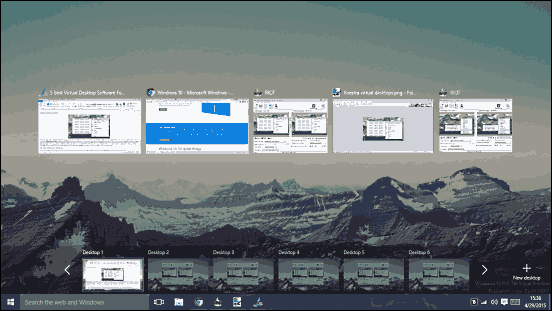 Love the virtual desktop functionality but don’t want to bother installing yet another third party software application? Not a problem at all, as Windows 10 comes built-in with the feature. One of the many new incredible goodies of Windows 10, the multiple desktops feature lets you create unlimited desktops and switch between them within seconds. To get started, hit the Task view icon on the taskbar, and the virtual desktop UI will come up. Now, simply click on the New desktop button in the bottom right corner, and create as many virtual workspaces as you want. When working with multiple desktops, clicking the task view automatically provides a visual overview of the open applications and windows. From this view, you can easily move an application from one desktop to another, and the horizontal switch bar at the bottom makes going from one desktop to another a cakewalk. Read more here.

The above discussed virtual desktop applications should come in really handy for increasing user productivity. Try them out, and shout out your thoughts in the comments below.