HTTPNetworkSniffer is a free packet sniffer software. It scans your network and captures all the HTTP request and response messages exchanged between the web server and the browser, and displays them as a simple list like format.

HTTPNetworkSniffer is a pretty comprehensive utility. For each captured HTTP request, it can return a multitude of information such as Host name, HTTP method (GET, POST, READ), URL path, User agent, Response Code, Response String, Content Type, and a whole lot more. You can also export all of this captured information into a variety of popular formats such as CSV, TXT etc. Apart from that, you can also generate an automatically formatted HTML report of the captured information. HTTPNetworkSniffer can work either directly (using the Raw Sockets capture method), or with the additionally available drivers (WinPcap Capture Driver or Microsoft Network Monitor Driver). Sounds like something you could use? There’s only one way to find out!

How To Use This Free Packet Sniffer Software?

HTTPNetworkSniffer is a pretty feature loaded application but as a standalone executable file under 150 KB in size, it’s ridiculously lightweight. Just like any other portable application, all you have to do to get started is download, run and voila! Here’s how HTTPNetworkSniffer looks like: 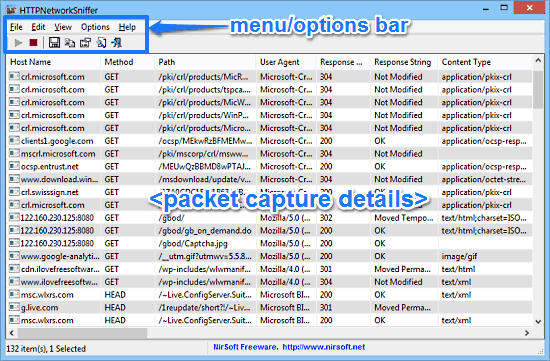 As illustrated above, HTTPNetworkSniffer sports a fairly simple and straightforward single window user interface. The majority of the UI is dominated by the information window where the details of the captured HTTP packets are listed. Apart from that, there’s just a standard menu bar and an icon based options bar up top. Not that hard, right?

Using HTTPNetworkSniffer to log the HTTP request and response communication between the web server and your browser is pretty easy. Here’s how to get started with this thing:

Step 1: When you fire up the software for the first time (as administrator), you should see the initial configuration window. It should look something like this: 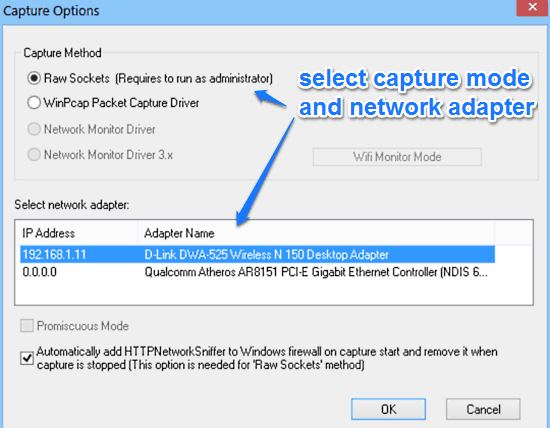 As illustrated by the above screenshot, the initial configuration window lets you select the capture method (preferably Raw Sockets), and the active Network Adapter. Make your selections, and hit the OK button.

Step 2: That’s all! Once you hit the OK button, HTTPNetworkSniffer will instantly get to work, and start sniffing network packets to capture the HTTP request/response communications between them. As mentioned in the beginning of the article, the application displays a ton of information (e.g. Host name, Method, Path, User Agent and Response Code) about each captured packet in a columnar fashion, with each parameter being displayed in a separate column. How cool is that? 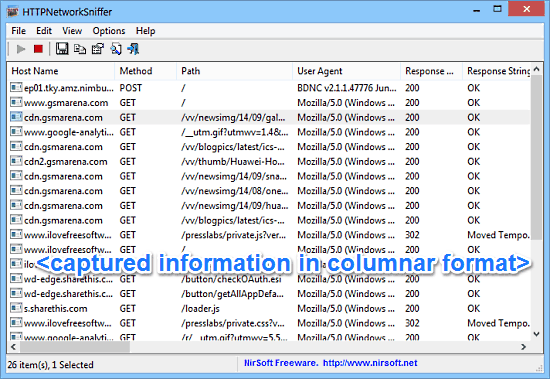 You can use the File > Save Selected Items option to save the capture information into a variety of formats such as CSV, TXT etc. If you would rather have properly formatted HTML report of the same, simply use the View > HTML Report option.

HTTPNetworkSniffer is a surprisingly loaded free packet sniffer software. It’s extremely simple to use, displays a whole lot of information about the HTTP request/response communication between your web browser and the web server, and most importantly, works as expected. Add to it the fact that you can also generate automatically formatted HTML reports, and this thing gets even better. Do give it a try, you’ll love it.