Climbi is a free website to code with others. Exceedingly simple and easy to use, Climbi lets you write away code in a no-fuss fashion and then share it with others, all in a matter of few clicks. It features a web-based minimal code editor that supports features such as line numbers, multi-colored syntax highlighting, and automatic indentation. Climbi supports a diverse array of programming languages, such as C/C++, Java, Lisp, CoffeeScript, Haskell, Ruby, Python, VBScript, Scala, Clojure, and many more. The shared code can be accessed via a unique URL, and can be edited by everyone. Every time an edit is made, a new copy of the shared code is saved. The shared code is preserved on Climbi’s servers as long as there’s at least one view per year. Getting excited to share some code already? Let’s jump in, and find out more.

How To Use Climbi To Share Code With Others?

Climbi has been designed from the ground up to make sharing code with others as easy as possible. Probably that’s the reason that you don’t need any kind of account or registration to use the web-based service. There are no pesky Facebook, Twitter or other third party login buttons either. One look at Climbi’s homepage, and it instantly becomes clear that it means business. Here’s how the homepage looks like: 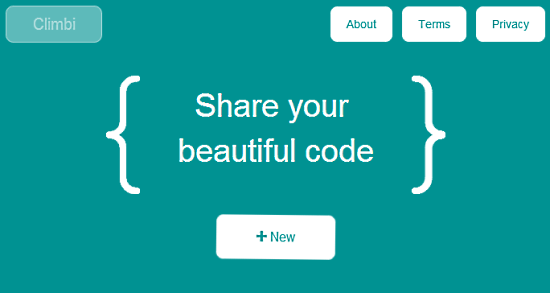 See, told ya! As illustrated by the above screenshot, Climbi has nothing that shouldn’t be there. The homepage instantly makes the purpose of the website clear. There’s just a couple of buttons on the top right corner linking to some general resource pages. Front and center, there’s just a four word description of what Climbi does, along with a wiggling New button that does all the job!

Using Climbi to type away your code and share it with others is a heck of a lot easier than you might imagine. Here’s a little step by step tutorial anyway, to get you started:

Step 1: Hop over to the homepage, and hit the wiggling New button. Once you do that, Climbi’s code editor pops up. Check out the screenshot below: 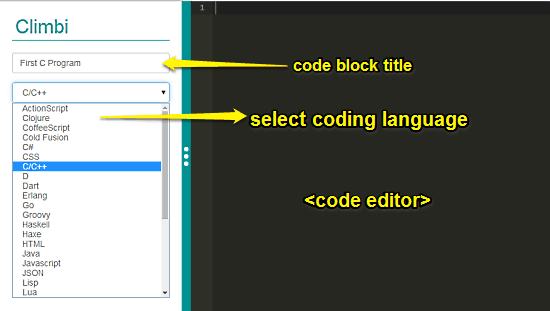 As illustrated by the above screenshot, Climbi’s code editor is pretty simple. Primarily, it’s comprised of two panes. The Left Pane lets you give your code block a title. Apart from that, there’s a drop down list from which you can select the programming language in which you want to write the code. As mentioned in the beginning of the article, there’s a lot of options, ranging from ActionScript and Clojure to XML and YAML. The Right Pane is essentially the code editor area, where you write away your code. The left pane can be collapsed to the left as well, to make room for even more code.

Step 2: Once you’ve specified the options in the left pane, simply type away the code that you want to share in the right pane. As Climbi’s code editor supports syntax highlighting and automatic indentation, entering code becomes even easier. Once you’ve done your thing, simply hit the Save button on the left.

Step 3: That’s it! Once you hit the Save button, the current version (the first, in this case) is automatically saved in the cloud. You can use the Share button to get the unique sharing URL that can be used to share this code block with anyone. The Edit button can be used to make changes to this shared code block. However, every time a change is made, the code block will be saved as a new version. And all of the versions can be accessed under the All Versions section. How cool is that?

Climbi is a an amazing free website to code with others. It’s super simple to use, supports a large number of programming languages and works the way it’s supposed to. Features like a minimal yet feature loaded code editor, syntax highlighting, most control etc. make Climbi an efficient way to share code with others. Do give it a try, and let me know your thoughts in the comments below.