Getting out of excuses to skip classes or work, then do not worry and use “Magic Late Ball” to get tons of late excuses. Magic Late Ball is a free iPhone app to generate creative excuses in a second. Simply shake your iPhone and the app will do the rest. It doesn’t generate excuses that are already displayed once. That means each time you shake your device a new excuse will be ready to get you off the hook. This app ensures that you didn’t get caught using same excuses again and again. Never use the same excuse again, as you can generate tons of new convincing excuses using Magic Late Ball.

Generally, we get bored with our same schedule for work or classes and desperately need a day off. But we can’t find any excuses as we have already used dozens of them. Here comes this free iPhone app handy to generate new excuses that can convince others. If you want a day off or going to be late for work or classes then this app has got your back. The app is very simple and doesn’t include any “Rocket Science”, just shake your iPhone for a new excuse.

If you are planning to skip work or classes, then immediately install this fun app from the link provided at the end of this post or directly from the App Store. As soon as you open the app, an excuse will be shown in the app interface. The following snapshot shows the app interface when I opened it for the first time. 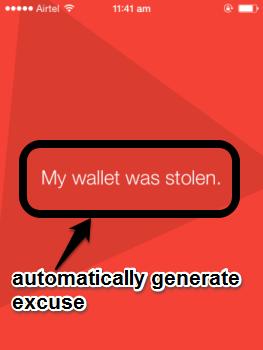 You might have used many websites to generate best excuses, but you should try this app at least once. You don’t have to feed any input as it generates excuses automatically. Stop wasting your time thinking about different excuses to skip or get late for work. All you need to do is install the app and shake your device to generate little lies or excuses. The following image shows how to generate new excuses by shaking your device. 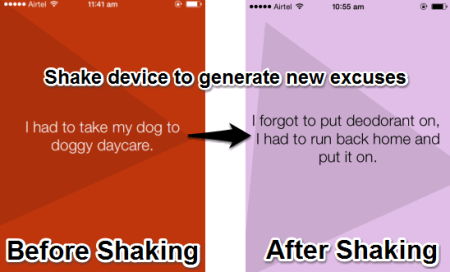 We have also reviewed some interesting iPhone apps like Sharalike, FastCap, and Dodub (An opposite app of Dubsmash).

Magic Late Ball is an interesting and fun app for iPhone to generate late excuses. If you are late for work or classes, then surely this app will help you make tons of excuses instantly to get off the hook. Honestly, I like this app because we don’t have to feed anything to generate excuses. All we have to do is shake our devices and get ready to make an excuse.