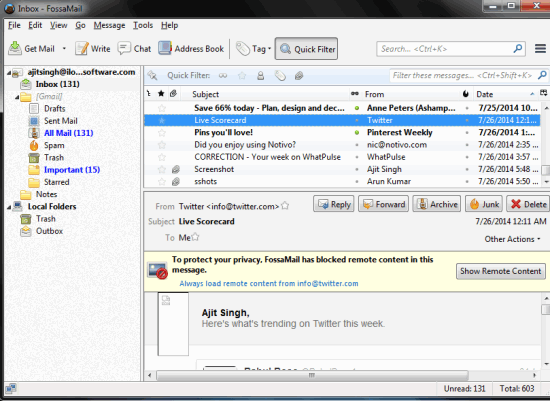 Note: Both FossaMail and Mozilla Thunderbird are same in interface and functionality but FossaMail is neither a product of Mozilla nor its supported/affiliated by Mozilla.

Key Features of This Mozilla Thunderbird Based Mail Client:

In Mozilla Thunderbird, there is only Mail Toolbar by default, but in FossaMail, you will find both Mail Toolbar and Menu bar by default (see screenshot below). Other than this, all the other things are same in both the clients except for the optimization and faster mail access, as described by the FossaMail developer.

Here is a list of some of the features:

As I said, FossaMail looks exactly similar to Thunderbird when it comes to interface and its functionalities. The developer has mentioned that it has been optimized to work faster but to be frank, I didn’t feel any difference between the speed of the two mail clients. As they have also said the most of the changes are present “under the hood” so it may be possible that you might feel them after a regular use of few days.