Stykz is similar to the Pivot stickfigure animator except that Stykz has several additional features  like exporting animation to different formats and manipulating them on-stage.  An important feature of Stykz freeware is that the user can create commonly used stick figures and save them to the library from where they can be used again and again simply by drag and drop. 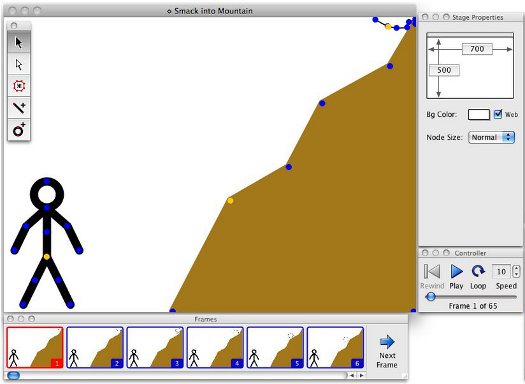 The notable Features and advantages of Stykz stick figure animator are:

Minimum: 1GHZ processor and a minimum of 1GB of RAM with Operating Systems like Windows 2000/XP SP4 and Mac OS 10.4.2 (Cheetah),Linux distributions.

Recommended: 2+ GHZ processor and a minimum of 2GB of RAM with higher versions of OS like Windows Vista/7 and Mac OS 10.5 (leopard)or higher,Linux Distributions.

The Linux distributions are in internal beta currently, and will be available publicly soon.

Stykz is completely free to use and distribution and does not require any license to do so. Stykz freeware is capable of being run on multiple platforms like Windows, Linux and Mac Os and can be downloaded from stykz.net. The animation file gets stored as .Stykz file which can be viewed on different platforms.