This tutorial talks about ArcConvert, a freeware program to convert compressed archives from one format to another. It supports a large number of input formats, and quite a handful of output formats as well. ArcConvert can also automatically detect password protected archives and transfer the password protection to the newly converted archive, if the same is provided by the user. Excited to know more? Keep reading to find out!

In one of my recent articles, I talked about how WinZip introduced a majority of first time computer users to the concept of file compression/decompression. It’s true that technology (both hardware and software wise) progresses at in insane pace these days, and we have much more space in hard drives these days than we used to a few years ago, but nothing bad in gaining a little more of those precious GBs, right? That’s why I personally feel the entire concept of file compression is still relevant. There are a lot of great freeware file compression software available out there, and most of them support quite a handful of formats.

But what if you download an archive in some obscure format that your favorite compression software doesn’t recognize? Either you can scour the Internet to find a software that will read it, or you can use ArcConvert, an amazing freeware program, that will actually convert an archive from one format to another.

ArcConvert: An amazing freeware archive conversion utility that packs quite a punch

ArcConvert is a really cool freeware archive conversion utility, that you can use to convert your archives from one format to another. ArcConvert supports a huge number of input archive formats (around 50), and about 20 output formats. This freeware application can come in really handy in situations  when you come across an archive in some never before seen format and you need to convert it in a more familiar one. ArcConvert supports tons of input formats (some of which I’ve never seen or heard of before!). Apart from this, ArcConvert also has some nifty features built in it. Let’s see what it’s got:

ArcConvert is hosted at SourceForge, and can be downloaded from its page. The best thing about ArcConvert is that it’s downloadable as a zipped archive (how fitting!). All you have to do is unzip the archive, and run the executable “arc_convert.exe”, to launch the program. Here’s how ArcConvert looks: 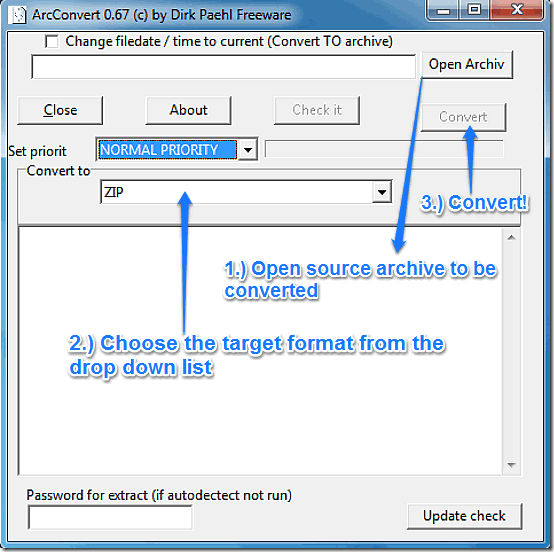 As illustrated by the above screenshot, ArcConvert has an ultra simplistic user interface, consisting of just one window. There are no multi-level context menus, no complex settings, nothing. The above window is all that ArcConvert is about. The UI is highly intuitive and straight forward, with each and every function being clearly labeled. Although the above screenshot is pretty much self explanatory, here’s what the buttons and drop down menus that you see above do:

Converting an archive from one format to another using ArcConvert

As explained earlier, converting an archive’s format is really simple. You just have to select the archive, select the format you want to convert it to from the drop down list and hit Convert. If the archive is protected by a password, you have to specify it in the Password for extract box. That’s all there’s to it. Here’s a little animated graphic illustrating the conversion process.

As illustrated by the above animated graphic, ArcConvert displays a small summary after converting the archive, and even prompts the user to try again using another target format, if choosing a particular format results in a greater sized archive than the original one. Pretty nifty addition if you ask me!

ArcConvert is a great freeware utility for converting archives from one format to another. Featuring a simplistic UI, it does what it’s supposed to, and does it well. At just under 5 MB zipped, ArcConvert packs in quite a punch, supporting a myriad variety of formats, some of them really unknown, at least to the casual users. The fact that it’s available as a zipped archive and thus can be carried around as a portable app, is an added bonus. I suggest you give this little freeware a go, you won’t be disappointed.