This tutorial explains how to use split pane and tab reorder feature of Windows Terminal. In the new release of Windows Terminal app, you can open multiple panes and split different windows there. With this new feature, you can simply focus on multiple command lines at the same time. With keyboard shortcuts, you can open multiple panes and run multiple commands in them and see the progress. However, for now it only opens the default profile in different panes simple via keyboard shortcuts.

If you use some free command prompt emulator tools then you must have noticed it that they come with split pane feature. The split panes help users to focus on multiple tasks without switching between the tabs. And now Microsoft is also trying to do the same. In the latest preview of the Terminal app, you can use multiple panes. The panes can be invoked by simple keyboard shortcuts and there is one extra feature is added that is tab re-ordering. You can now simply use the drag and drop operations to reorder the tabs.

How to use Split Pane and tab Reorder Feature in Windows Terminal?

You can download the latest Terminal preview release from here and install it. In the 0.7 version, this tab re-ordering and split panes is included. You just get the app and then start using it. This is also available on the Microsoft App Store. Just open the app and to open multiple panes, you simply issue the “Ctrl+Shift+” combination to open a split pane. Similar shortcut can be used to open split pane in vertical mode. 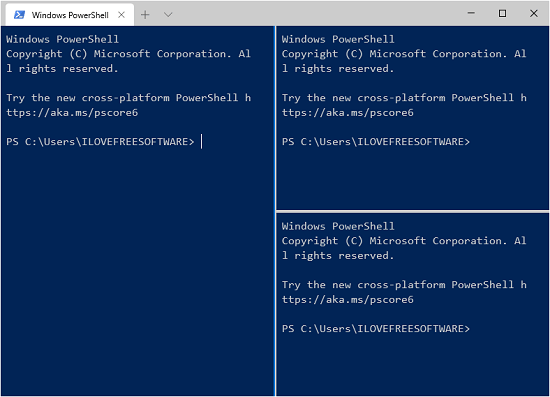 In the above screenshots, you can see how this split pane feature works. Now, if you have multiple tabs open in the Terminal app, then you can reorder them. For that, you only have to use simple drag and drop operations and then simply reorder the desired tabs. You can see this in action in the following GIF. This is a useful feature to group similar tabs altogether.

If you use the new Terminal app then you can now use the two newly introduced features that you can use with ease. Here you just get the new app and then you are good to go. It doesn’t rely on your whether you have Windows 10 preview installed or not. You just use the app and works on multiple terminal windows at the same time.

If you are a user of Windows Terminal app then you will like the two newly introduced features. You just get the app and have access to these features now. The only limitation for now is that it is only supports default profiles. In the later updates, there will be an option to choose a specific profile for the panes. So, if you were hoping for split panes feature in Terminal app then you can now try it and let us know what you think.