This is a list of 5 best free websites to build app screenshots for Google Play Store.

All the websites are completely free to use and don’t stamp any watermark to your app screenshots. If you’re an Android app developer, then you got to try these websites. However, if you’re more into iOS apps then you can check out our post on 5 Free Websites to Build App Screenshots for App Store. 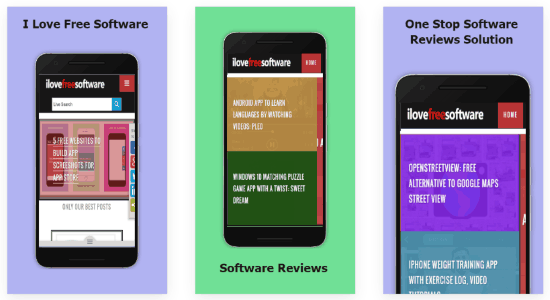 App Launchpad is a powerful website which can be used to build stunning app screenshots for Google Play Store. This website comes with the following 5 screenshot templates: Full Device, Caption Below, Full Device Caption Below, Caption Above, and Full Device Caption Above which you can use for your app screenshots. When you’re done choosing a template, you can go ahead and select a device among Nexus 5x and Nexus 6p. The Nexus 6p model is available in Black color only, whereas, you can choose Black, Cally White, Darb White, Darb Black, Tricia White, and Tricia Black for the Nexus 5x model. When you’re all set with the template and a device, you can import up to 5 app images and then customize them individually. 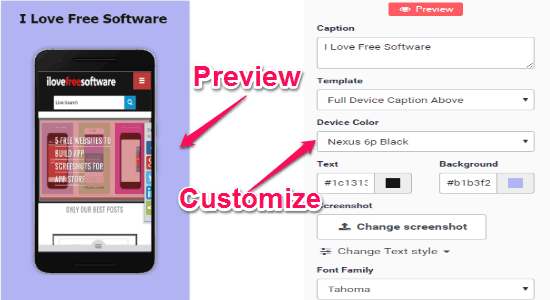 For each screenshot, you will be able to choose a different template, add text caption at the top or bottom, change text color, text font, text weight, text size, and also select different background colors for the screenshots. There are 14 beautiful text fonts which you can use for adding text caption including Georgia, Tahoma, Impact, Times, Arial, Verdana, etc. It also offers 10 predefined color filters, which can be applied to the screenshots for making them more impressive. At last, you can download the app screenshots as PNG images and use them on Google Play Store.

App Screenshot is another useful website to create app screenshots for Google Play Store. It provides 7 different screenshot templates of the following Android devices: Galaxy 3, HTC One Black, HTC One White, Nexus 4, Nexus 5 Black, Nexus 5 White, and Nexus 6. You can choose any of the devices and then proceed to customize your app screenshots. First, you can select your favorite background color using the universal color picker. After that, you can add a text title (caption) to the screenshot by typing anything in the text input field. 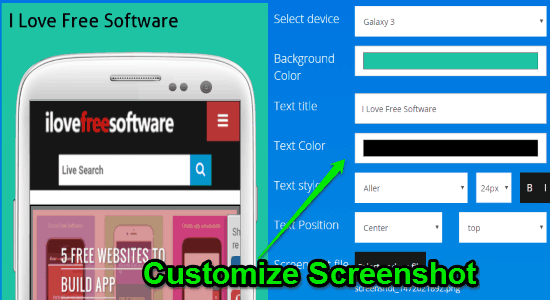 This website also allows you to completely customize the text caption by changing the text size, text formatting (bold or italic), text font, text color, and more importantly the alignment of the text (left, center, or right). Apart from that, you can also select the position of the text caption either by placing it at the top, bottom, or center of the screenshot. To make your screenshots look more stunning, you can choose from 10 different fonts (Exo, Nobile, FiraSans, Aller, Quicksand, etc) for the text caption. After you’re done with customization, simply upload your image to the website and generate a beautiful app screenshot. You can export the screenshot as a ZIP file by feeding your email id, as it sends you an email with the download link.

Appscreens.io is a free website that lets you make great-looking app screenshots for Google Play Store. It comes with powerful customization tools but offers only a single Android device template i.e. Google Nexus 6 which can be used for creating app screenshots. Similar to the website App Launchpad, this one also allows you to import 5 images at once and then customize the screenshots individually. Remember, the ideal resolution of the app’s images should be 1080×1920 px for getting a better result. You can customize the screenshots by adding a text caption, choose different text formatting (regular, italic, or bold), text font, change text color, and also select different text sizes. 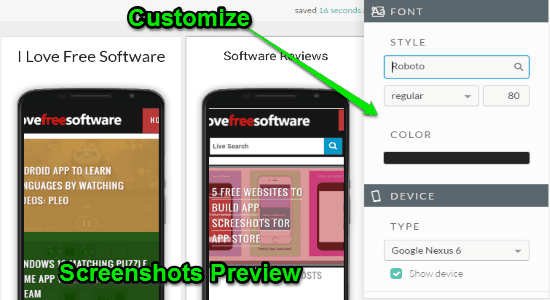 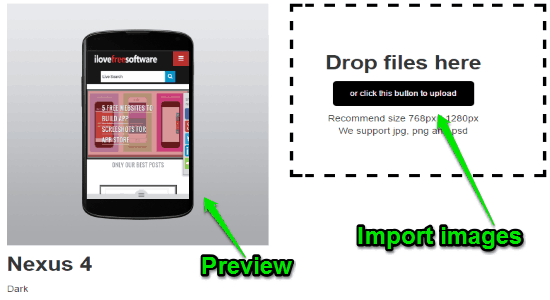 Device Art Generator is actually a web tool offered by the official “Android Developers” website. Using this tool, you will be able to generate app screenshots for Google Play Store in a flash. For this, all you got to do is drag any image into the available device frames and then it will automatically place the image within the device template and generate a beautiful app screenshot. The available devices are Android Wear, Nexus 5X, Nexus 6P, Nexus 9, Nexus 4, Nexus 5, Nexus 6, Nexus 7, and Nexus 10. Another useful feature of this website is that you can create screenshots in both portrait and landscape mode. 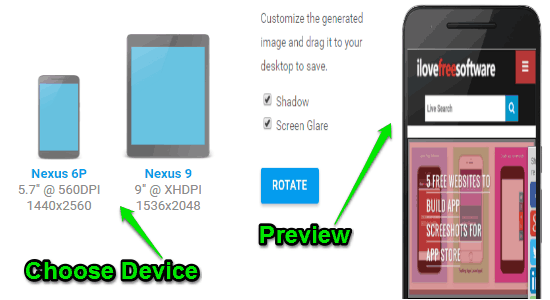 Apart from letting you create app screenshots, this web tool doesn’t have any other customization options. However, you can add a shadow and screen glare before downloading the resulting image. You can also rotate the app screenshots clockwise or anti-clockwise before exporting. Similar to the website MockuPhone, Device Art Generator also has no option to add text caption but if you want to add one, then you can download the app screenshot and use any of the online photo editors to do the same. To download the output image, all you need is a click on the preview template and it will be downloaded automatically as a PNG file.