HeavyLoad is a free load testing software that is intended to stress all the resources like CPU, RAM, hard disk, network, operating system and many more in order to test the reliability of the PC. HeavyLoad is useful in testing the system.

This free load testing software is useful for checking important MS Windows file or many database servers before using them for production. It mainly tells about the system faults for example it checks that whether the PC is getting hot when it is more intensively used. HeavyLoad is a load testing software which tells you how reliable is your PC and how your PC will work under heavy load. 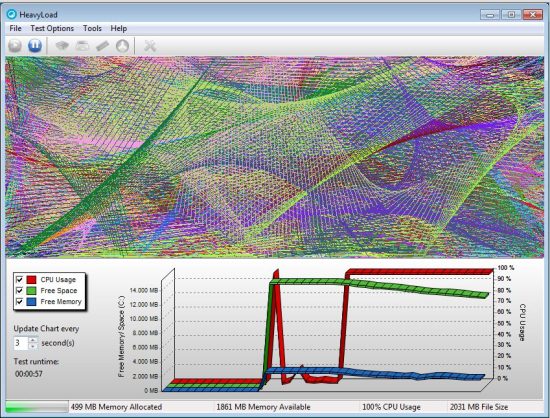 HeavyLoad is a free software for windows which generate some artificial load by running some intensive program in infinite loop like CPU, Memory, hard disk running many programs together at the same time. By monitoring the performance of system under heavy load gives you an overview of your PC in terms of graph.

To stress test PC,  HeavyLoad writes a large test file to the temp folder. It then allocates physical and virtual memory and performs complex calculations. Then it draws pattern in windows.

After using HeavyLoad memory of your pc is fragmented heavily so there is a need of restarting your pc after a stress test. In order to check pc for heavy stress you need to run HeavyLoad for many hours at same time. HeavyLoad is a good way to find out minimum, optimum and maximum specification of your pc.

HeavyLoad is a program for limited usage, it should not be used daily. Once a while you can test your PC to check its performance under HeavyLoad.

Some other testing software we reviewed earlier include XStudio, cross browser testing tools, and NovaBench.

HeavyLoad supports many operating system. Some of them are:

Some of its new features of HeavyLoad are:

So check the new load testing software HeavyLoad to test the stress and performance of your PC.