ALSong is a free media player with lyrics, making it one of very few media players that do not require modification or the use of a lyrics plugin in order to provide lyrics as the songs play. The fact that it combines the functionality of a media player with a lyrics generator negates the need for two pieces of software, bundling them together into a useful and convenient package. 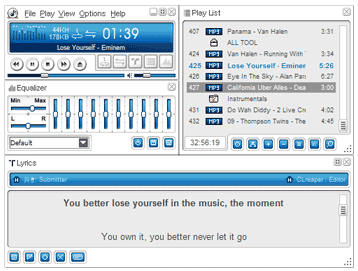 Here are some of the features of ALSong Media Player:

It is quite surprising that most of the best free media players do not provide the Lyrics feature, as ALSong does.

Obviously the biggest feature of ALSong as a free media player with lyrics is the fact that you can have lyrics scrolling as your song plays. This makes it perfect for those who like to sing along to their music.

However, unlike some other lyrics services like MiniLyrics, you have to keep the program on top of everything else on your computer if you want to see the lyrics, which is quite an annoyance for someone who is a busy computer user as well as a music enthusiast.

So ALSong is a lovely bit of software that does its job as a free media player with lyrics well. However, the media player aspect of it lacks many of the features that other media players like RealPlayer have, meaning that it probably won’t work as your main media player.

We think that, on balance it is probably better for you in the end to use a normal media player and a lyrics add-on, such as EvilLyrics. This makes for a much better experience overall as you can keep using the media player you are familiar with whilst also getting the lyrics.

Another good option is Tubeoke that lets you see lyrics with YouTube videos.