The Windows 10 role playing game app can be downloaded from the Windows 10 store or from the link given at the end of this article. When you start this app you will see an interface as shown in the screenshot below.

This is the start page of the app, as seen above. The controls link will show you how to move around in the game. Use the left and right arrow keys to move left or right. Use the upward arrow key to jump and press esc to pause the game. The game cannot be played on a touch screen device. You have to use your keyboard. 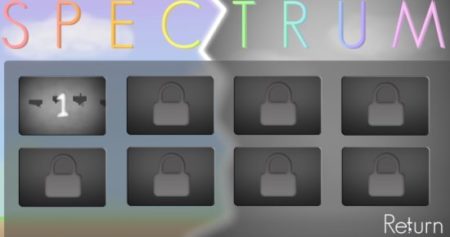 Only level one will be unlocked, that is the level you start with. You can unlock other levels when you clear the previous one. Click on the start button to start the game. Initially you are shown a short video, where you are shown how the evil sorcerer took all the colors from the world and trapped them in 7 color crystals, which are now scattered all over the world. You wake up in a jungle and your journey to find the color crystals starts from there. The game play screen is shown in the screenshot below.

You are the boy shown on the left side of the screen. You have to make your way through the jungle, fighting enemies, collecting gems, exploring deserted factories, etc. Throughout the game you will see no color, the entire landscape is grey in color.

Spectrum is a decent game app to play when you have some free time. The background story of the app is quite nice with a lovely soundtrack. Just walk through different landscapes to find the color crystals, so that you can give back color to the world. The grey world graphics are quite nice and the game play is quite easy to understand.

Check out Spectrum for Windows 10 here.