Similarly, My Computer is one of the most accessed locations, not just in Windows 10, but pretty much every version of Windows. Wouldn’t it be awesome if there were a way to quickly fire up the modern style PC settings app, directly from My Computer (also called This PC)?

Turns out, there indeed is a way. Wanna know more? Then what are you waiting for? Jump past the break, and find out how you can quickly access PC Settings from My computer in Windows 10.

How To Quickly Access PC Settings From My Computer In Windows 10?

You can easily access PC Settings from My Computer in Windows 10, and it takes no more than one click (definitely better than having to go to the Start Screen or Start Menu first, finding the PC settings app, and launching it). Here’s how it’s done:

Step 1: Open up My Computer (or This PC, as it’s called in Windows 10). Now, move up towards the Ribbon Menu. If the Ribbon Menu is not expanded, expand it via the Ctrl+F1 keyboard shortcut. 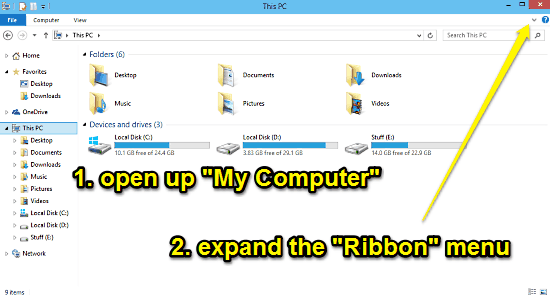 Step 2: As you probably already know, the Ribbon Menu features a tabbed UI, with each tab having a couple of options. By default, the Ribbon Menu (in My Computer view) has the Computer tab activated. Now, all you have to do is click the modern style icon (the one with a Gear motif on it) with the words Open Settings beneath it. Here’s a screenie:

And voila! The modern style PC Settings app will be instantly launched. Simple and convenient, right?

So, How Exactly Is This Better Than Launching PC Settings From The Start Screen Or Start Menu?

I’m sure that this must be the question going through your mind. I mean, why bother with all of this clicking here and there, when you can open PC settings in almost the same time via the regular method?

The answer is simple. The major time consuming part of the above mentioned process is only one time. That’s because once you expand the Ribbon Menu, it stays that way (until it’s collapsed again) What’s more, it always has the Computer tab activated by default. So essentially, once you’ve expanded the Ribbon, it’s all a matter of clicking the PC settings icon on the Ribbon UI. No more than one click makes sense now, right?

The ability to quickly access PC settings from My Computer (or This PC) in Windows 10 is a minuscule, but useful feature. As such, it may not even be even noticed by majority of the users, but will definitely save some time (even if that’s a microsecond) for those who routinely open up My Computer, only to realize a split-second later that they actually wanted to dive into the PC settings, to tweak one thing or the other.

What do you think about this little feature? Do let me know in the comments below.