This article covers how to restart Firefox without losing opened tabs and Firefox windows. This will be helpful when you update Firefox or there is some other need to restart Firefox. Instead of closing tabs or the entire window(s) and then open them again manually, you can let Firefox do that for you.

There might be some add-on for doing that, but I’m not gonna cover any such for this purpose. There is a built-in and hidden feature of Firefox using which you can restart it without losing opened Firefox tabs and windows. A restart page of Firefox is there which helps to do this. You can open that page easily and then use the restart option. It will close the Firefox tabs of all windows (if multiple windows are opened) and restore all those windows along with all tabs. Do note that the built-in feature won’t restore tabs opened in private windows of Firefox.

Let’s check how this can be done.

How to Restart Firefox without Losing Opened Tabs and Firefox Windows?

Step 1: Open as many Firefox windows and tabs as you want related to your work.

Step 2: Now open a new tab in any Firefox window. After doing that, type “about:restartrequired” in the address bar and press Enter.

Step 3: It will open the Restart Required page. There you will see a message like “we’ve installed some update in the background and restart is required…..“. A “Restart Firefox” button is also there. Use that button. 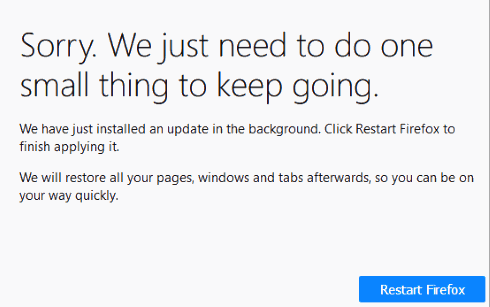 It will instantly close all the windows and launch all of them within 2-3 seconds. All the tabs of those windows will be restored as it is. However, it won’t refresh/reload any tab automatically. Once you will access some tab, then it will be refreshed automatically.

Though Firefox also provides an option to restart Firefox with add-ons disabled, it doesn’t serve the purpose that is covered in this article. If you feel the need to restart Firefox in between your work but don’t want to restore tabs and windows manually, this trick is gonna help you a lot.