This tutorial explains how to block all Twitter users on Followers/Following page of Twitter. Here I will mention a simple Chrome extension that does that in a couple of clicks. Here you can use this extension to mass block all your followers or followers of any other Twitter user. It goes through all the names on the Followers/Following page and blocks them all one by one. This is a good tool to get rid of trolls and potential abusive profiles. The extension is very simple, free and starts working right after you install it.

Twitter Block Chain Chrome extension also works on Firefox and if you use Firefox more often then you will like it to use it there as well. There are some other Twitter extensions that we have covered to do some automation tasks and new this mass blocker extension is new in the list and it is great. You can get rid of unwanted people in a couple of clicks and that would’ve taken hours if you try to do it manually.

How to Block all Twitter Users on Followers/Following Page?

Getting started with this simple extension is very simple. Go to Chrome web store and install it from there. After the extension has installed, you can then start using eight away.

Go to the Twitter Followers or Following page of any user or your own. After the page loads fully, just click on the icon of the Chrome extension and then select “Run Block Chain” option. 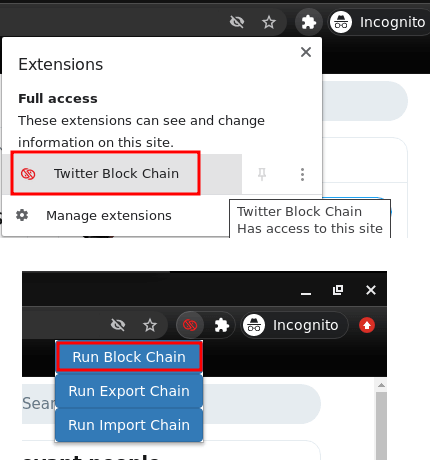 After that, you just start the tool and it will go through all usernames on the current page and will block them. This is as simple as that. You can see then see the list of all the users you have blocked in your blocked list. To do that, you go to Settings and then find the list in the section. 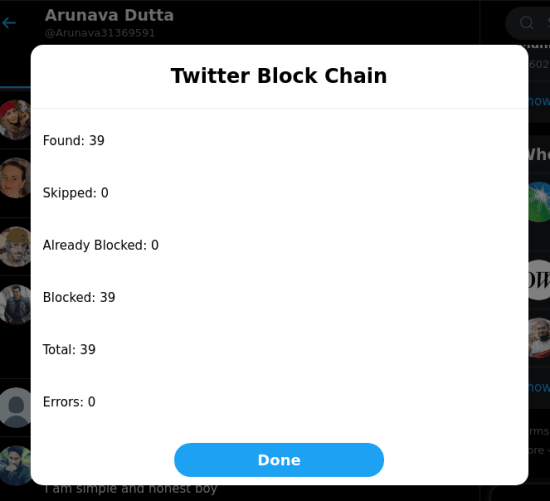 In this way, you can use this simple and powerful extension to block Twitter users in bulk. All you need is a few clicks and then you are simply done. Just block as many uses you want with this and get away from trolls. Apart from mass blocking, you can also use this extension to export list of all followers of a Twitter user. Also, the following list can be exported to JSON format.

If you are looking for a way to block users in bulk then you are at the right place. The Twitter Block Chain extension that I have mentioned here is just about the right tool you need to get rid of trolls. You can use it for other purpose as well. I really liked the simplicity vested in this extension and how it works to help you block people.