Talking Tom and Talking Ben is a free entertainment app for iPhone in which the famous Talking Tom cat and Ben dog act as the news presenters. They imitate all the things that you will say to them in a very funny way. You can also interact with them by touching and tapping on the screen. The app lets you upload your personal videos and make your own news items. You can also watch Ben dog teasing Tom cat and the fight between them. The app lets you share the news items and other voice imitations with your friends via Facebook, Twitter, YouTube and email. 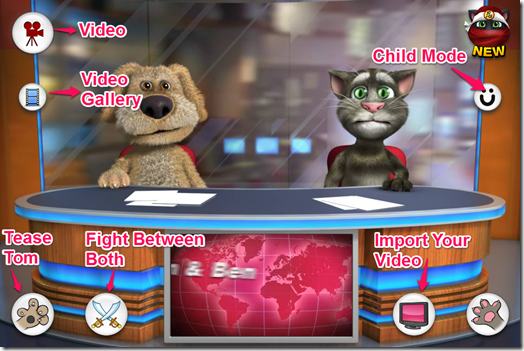 You can download the Talking Tom and Talking Ben News by either searching on the iTunes App Store or by clicking on the link given at the end of the review. Launch the app and you will see both Tom cat and Ben dog sitting at the news desk. You can speak anything and they will mimic it for you in their funny voice. They will imitate your voice one by one. You can also do various things to them by touching the screen. You can make them fall from the chair or make them revolve around while sitting on the chair. 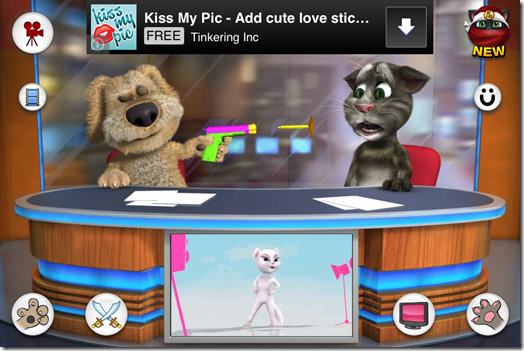 You can also have fun by making them fight each other. If you want to make them fight then tap on the two swords icon at the bottom of the screen. There is also one more icon adjacent to this icon. If you will tap on it then Ben dog will tease Tom cat by using boxing glove and a toy gun. There are lot of other things for you to do. Lets have a look. 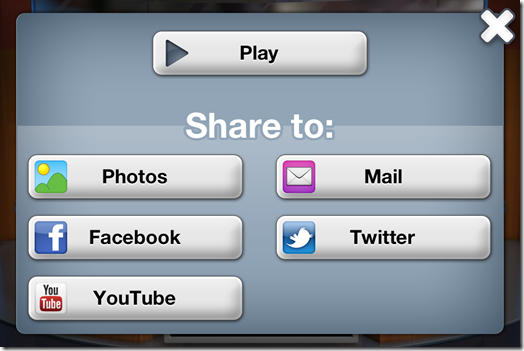 2. Video Gallery: Checkout the videos uploaded by others. You can choose video from Top, New and Most Liked Videos.

3. Import Video: Tap here to import any video from your device to the app. You can also record a fresh video by using your device’s camera.

4. Child Mode: Turn the child mode on/off from here. If you will turn the mode on then the option for sharing the video and watching the uploaded videos will disappear.

Checkout the Talking Angela app  for Android by the same developers reviewed by us.

I didn’t like the Talking Tom & Ben News app very much. The app looks very interesting and funny when you use it initially but it becomes boring after some time. The characters don’t do something different other than the pre-defined actions. The app also doesn’t let you upload larger files to make your own funny videos. The app can be entertaining initially but, it will not be so entertaining after using it for few times. Do comment below about your views on the app.

Get the Talking Tom and Ben News app from here.