Fatify by Apptly is a free application for iPhone and iPad which allows you to edit your photos in such a way that you look fat. It is a fun application which lets you increase the size of the face of the photo you have captured so as to see how one would look like if he/she is fat. You can either click the photograph or choose the photo from library as well. Choosing the photo from library has one downside though, you need to have the image face in accordance with the requirement of the application.

A single tap can be used to switch between the normal photo and the edited one so that you can compare and decide. 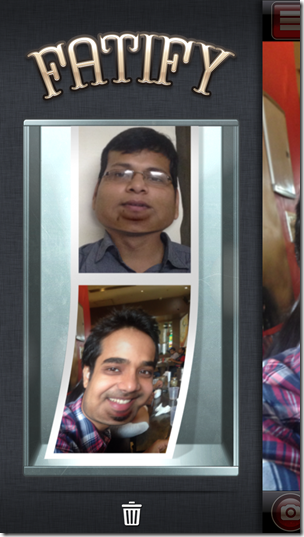 Fatify is a simple to use application like all applications of its genre. All you have to do to start with is take a picture of the face from your camera or choose one from your library. Once you choose a picture to work on, you have 4 control points on the image which will automatically detect the lips and the optimum limit of increase in mass of the face. In case you are not satisfied with the pre defined version, you can edit it manually as well. Just remember that three dots near the lips is the extent to which the lips will be fattened. The fourth dot decides the limit of loose skin hanging from the face. After selecting and adjusting the image, just hit done and you can enjoy your fattened image. 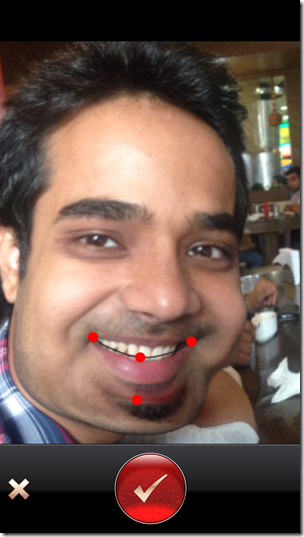 A fun part involved now is interaction of the image. When you tap on the image or leave it untouched for a while it does some particular fat things. It burps, creates sounds which one creates after getting tired, sounds of yawning and so on. This complements the image very well and adds a tinge of humor as well. A single tap on the image will shift it back to the normal unedited version so that you can compare the two faces.

There are multiple options for sharing. You can either share the fattened image or you can also create a video using the above mentioned sound effects of yawning and all. This can be shared on Facebook, Twitter or YouTube. You can also download the video and save it to your library. All your previous creations are stored in a side reel which can be accessed by swiping from left of pressing the top left button in the application. 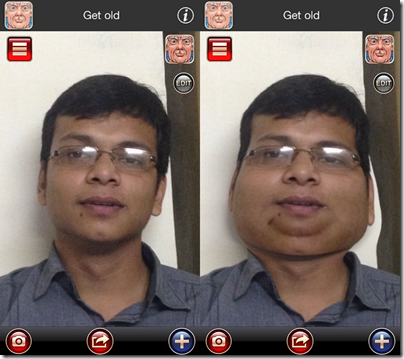 The application is easy and fun both to use. Although many applications of this type are available, this one has a cleaner interface to use. I experienced one problem though which I’d like to mention here. When you fatify an image, sometimes, the background also gets distorted which gives a very unreal and untidy effect to the image. If this is fixed in future, this can easily be a good application for entertainment purposes.

Get Fatify for iPhone free from here.