Cameo is  a free iPhone app which lets you create and share professional looking short HD videos. In reality, the Cameo lets you shoot 6 seconds clips but you can merge multiple clips to create full video. There is no limitations on the number of clips that you can merge in a single video except that the total length of the full video should be less than or equal to 2 minutes. The videos created using Cameo are of 720p HD quality. While merging the clips, you can arrange the clips in any order, trim them and add captions to them. Each of the video created using the app is known as a Cameo.

The app lets you add title, background soundtrack and even add themes to your video. After the creation of the video, the app lets you share the video on Cameo, Facebook, Twitter, Tumblr, and even save to your iPhone. Besides this, you can follow other users of the app and watch, comment or like the Cameos created by them.

You can get Cameo app either by searching on iTunes App Store or by clicking the link given at the end of this review. The Cameo app requires you to register with the app before you can start using the app. You can register yourself with the app either using your email address or by linking your Facebook account with the app. During the registration, you will be given a unique url like: http://cameo.tv/yourusername. Anyone can use this URL to access your profile and watch Cameos created by you on their PC via any browser.

After the registration with the app, you will see the home screen of the app similar to the one shown in the screenshot below. The options that you can see at the bottom are: Feeds, Following, Shoot Clips, Activity, and Profile. 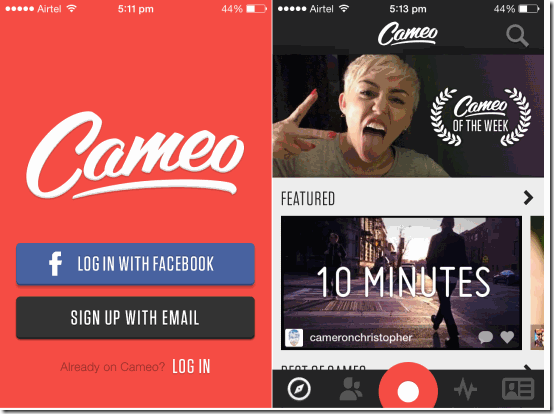 To start creating the Cameo, tap on the Shoot Clips (Red circle) option. You need to hold your iPhone in Landscape mode and shoot the clip of 6 seconds just like you shoot in normal. You can shoot clips as many as you want since the app lets you choose which clips to include in the app. When you have finished with all the clips, return back to the home screen of the app.

Note: Don’t forget that the total length of your full video shouldn’t be more than 2 minutes. 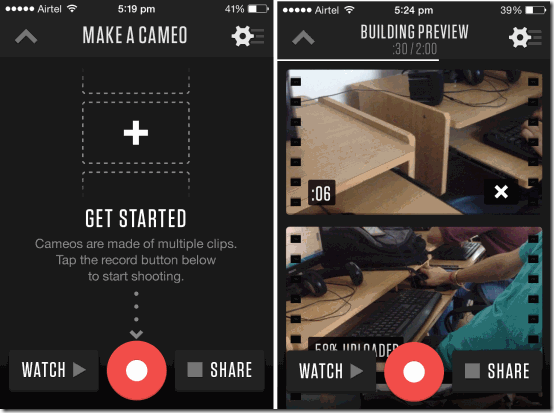 From here, you can change the position of any clip by holding and moving the clips. If you want to delete any clip, then simply tap on the cross button on that particular clip. You can also check the preview of the full video anytime by tapping on the Watch option at bottom left side. The app also lets you add title, soundtracks (provided in the app), and themes to the created video. To reveal these options, just swipe on your screen towards left. You can also add your friends to the video just like you tag them on Facebook. 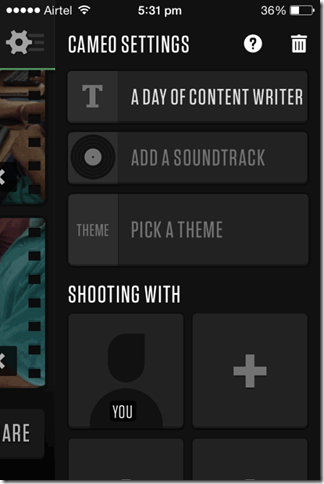 When you are satisfied by the created Cameo, then tap on Share option at bottom right of the screen. You can add description to your Cameo including the hashtags for categorizing your Cameo from the others. These hashtags also help others to find your Cameos easily. You can also set the Privacy Settings for your Cameo from here. 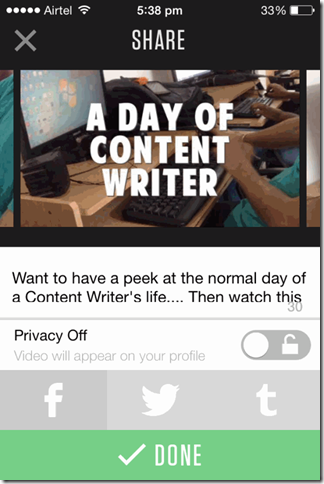 Other Features Of Cameo App For iPhone:

The Cameo app offers few other options as well like I mentioned above: Feeds, Following, Activity, and Profile.

Cameo is a very good app for sharing short clips and videos with the world that too with professional and HD quality. If I have to summarize Cameo in one line, then I would say that Cameo is the app which helps you in becoming the director of your own movie without any need of HD camera or direction skills. The two things which I liked the most about the app is that it lets you save the video to your iPhone which means that you can share it anywhere you want. Second, the privacy settings of the app ensure that only the Cameos you choose can be viewed by users.