Celebrity Guess is a free iPhone puzzle game where you have to guess the Hollywood celebrity hidden behind blocks with in a given number of tries. If you are a big fan of the movies and Hollywood celebrities, than you will love this app. All you have to do is guess the name of the celebrity hidden behind blank squares covering the image. You can reveal the image behind by clicking and taking away one square at a time. You are only given a number of tries to guess the name of the celebrity.

When you first launch the app you will see a screen as shown below in the screenshot. 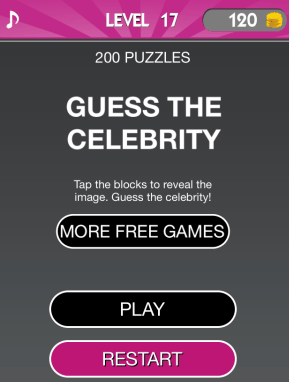 Click on the play button to start playing the game. The more free games button shows you other free puzzle games available from the same developer. The top of the page shows how many puzzles there are to be played. The restart option resets everything and takes you back to level one for a price of 90 coins.

As you click on the play button you will be given a layout like the one in below screenshot. 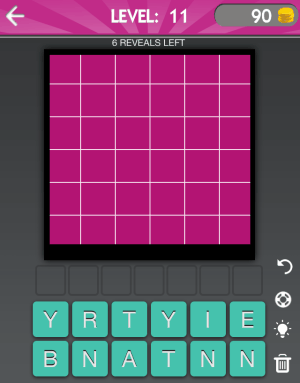 Here you see a pink colored box, this is where the celebrity picture is hidden. Now each of the squares on the pictures is a block in itself. Once you click or tap on a square block the part of the picture hidden below it will be revealed. Every level gives you a particular number of blocks which can be revealed and you have to guess the celebrity name within that number of tries. You can see the number of tries you are given at the top of the page. In the level shown in the above screenshot the number of reveals offered are 6. Once you are sure who the celebrity is, type out their first name in the blanks provided below the picture. The letters to fill these blanks are given at the bottom of the page. Remember, you need to enter the first name of the celebrity only.

For example, see the one I solved in the screenshot below. 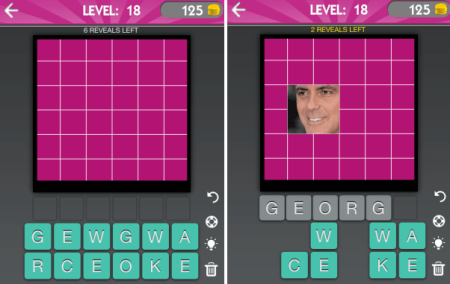 The icons on the right side of the screen have various functions, let’s look at then quickly.

Now each time you answer right, you are given 5 coins. These add up to your total coins which can be used later when you are stuck at any level.

This is how you play the game and advance from level to level. Its pretty simple and fun for people like me who are avid fans of the movies.

Another fun puzzle game app you should check out is Guess the Emoji free for iPhone.

The game overall is pretty simple and enjoyable. The only drawback, once you go past a few levels, you are shown a pop up ad after every 2 puzzle questions, which kind of gets annoying after a while. Otherwise, I liked the game and it was fun guessing all the celebrity names.