Guess the Emoji: Emoji Pop is a free iPhone puzzle game app. The game is pretty simple to play, all you have to do is guess the word represented by given emoji. Emoji’s as we all know are emoticons which show various emotions, objects, etc. You must have played a lot of these puzzle games lately on WhatsApp, where you have to guess either celebrity name, or movies represented by various emoji’s.

This puzzle game app also shows you couple of emoji’s which represent a word, and you have to guess what the given emoji’s are representing. When you launch the app the first screen you see is given below: 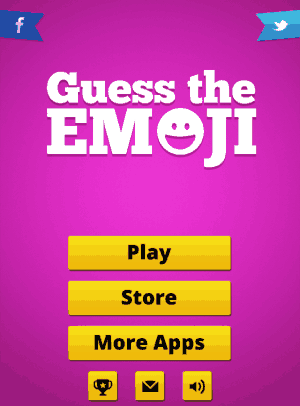 This page gives you three options; the first is “Play” option which lets you play the game. The second is “Store” option, which helps you in buying coins using real money. These coins come in handy when you have to use the hints option. The third “More Apps” option shows you more apps from the same developer which you can download for free as well. The Facebook and Twitter icons at the top of the page are for sharing the app with your friends via these networks. The sound icon at the bottom of the page is for turning the sound on or off. The email icon is for emailing the game app link to your friends. The trophy icon didn’t work for me, but my guess would be that it shows your performance stats of the game, or may even list best performance by other users. But its just a guess.

Once you click on the play button, you will be given your first emoji puzzle, like the one given below: 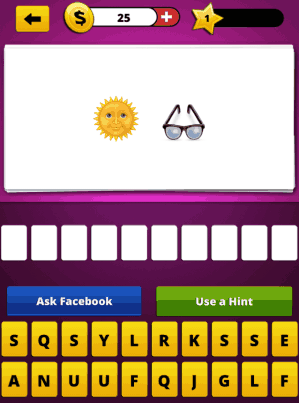 Here you are shown 2 emoji’s which represent a word. Like in the above screenshot, there is a sun and glasses, so the word is sunglasses. Yes, you might be thinking that this is way to easy. This is level one, so the emoji’s are simple, but as you move up the levels, you will find the difficulty level increasing.

Your job is to fill the blank boxes given below the emoji’s with letters, which you can choose from the random letters given at the bottom of the page. This can be seen in the screenshot above. Once you fill in the boxes with the correct word, you will be shown whether you were correct of not. If you answered right, one coin will be added to your total and you will be shown a continue button to move on to the next puzzle.

The arrow button at the top left side of the screen takes you back to the home screen. The one with the $ sign shows you how many coins you have. As I mentioned earlier, you can also buy more coins if you run out of them. The star with the number denotes the level you are in. 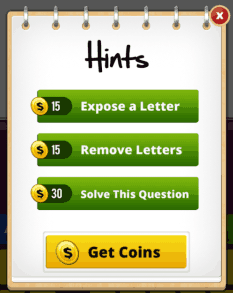 The “use a hint” button is for times when you are stuck and can’t think of the answer. As soon as you click this button a screenshot like the one above is shown. Now you can choose any of the three options, depending on the number of coins you have available. You can also buy coins using real money, if you run out of them.

You can also add more free emoji’s to your keyboard by adding these emoji keyboard apps for iPhone.

Overall, I found this puzzle game app fun. It was too addictive to stop playing, as the initial levels were simple. I kept on going till level 5, when I realized that I have to write a review of the app and submit, apart from playing. I recommend the app because its fun and simple with nice, clean interface.

Get Emoji Pop for iPhone free from here.