Carrom 3D is a free Carrom Android app that lets you play Carrom on Android phone or Android tablet. It comes with a realistic interface in which you hit the striker to the disks (called carrom men). This Android game lets you play carrom with computer of different skill levels. Interestingly, you can also play Carrom with your friends using the same device, or even play with your friends on same network using different devices.

Carrom is a popular table game that is especially played in Indian sub-continent. You can read details about Carrom on this Wikipedia page. If you are a fan of Carrom, you can experience the same on your Android phone using this Carrom App for Android. 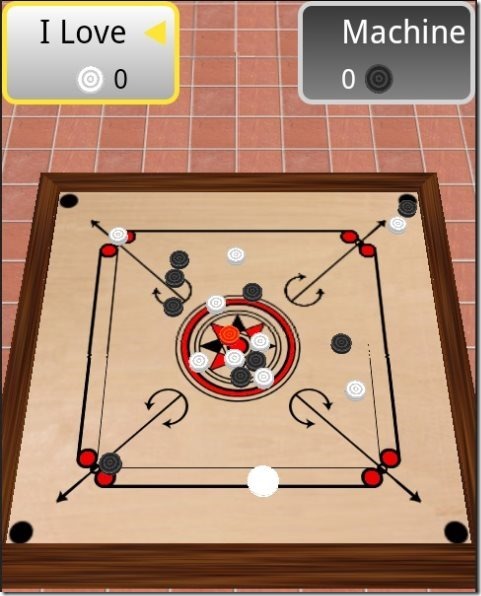 How to Play Carrom on Android:

This Carrom app for Android makes it quite easy to enjoy realistic Carrom fun on Android. To start with, download and install the app on your Android tablet or phone (download link at end of the article). When you start the app, it will prompt you to choose a name for yourself. After that, it will ask you to select level of difficulty by choosing opponent whose skillset is Beginner, Intermediate, or Expert. You can also choose to play with another friend using the same device, or play with another friend on same network. If you choose to play with a Human, you and your friend will take turns in hitting the striker. If you choose to play on “Network”, you will be taken to another window in which you can specify IP address of Android device which is on same network as yours. Of course, that device also needs to have Carrom 3D app installed. Then you can play carrom with your friend using your own device.

Once you have selected an opponent, you can start playing.

If Carrom is not your thing, you can try to play Drums on Android or play Guitar on Android.

You can download Carrom 3D from Google Play Store by using this link. The app is completely free.

I really liked this app as it simulates Carrom playing experience very nicely on Android. Despite the fact that a carrom is supposed to be large, this app makes the Carrom look good on small screen of Android phones as well. Try out this app and let me know your feedback in comments below.