Most of us use P2P software like Limewire or uTorrent to download and share files. In P2P sharing, your software tries to connect to some other computer out there that is runnig a similar program, and tries to download file from that. In some of the cases, those computers could have been compromised, or could have been set up as decoy computers to get the IP of the computers that request such files, and even to send spoofed files to the requesting computer (your computer, in this case). This means that you can end up downloading some stuff that you did not want to. 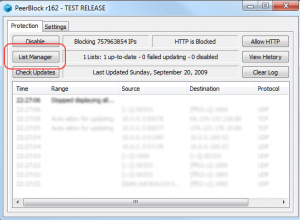 When you install PeerBlock, you can choose the type of IP that you want to block. The most useful option is “P2P” that blocks the known IP of the Anti-P2P organizations. Some other options are also available. After installation, PeerBlock will fetch the list of such IP from the servers. PeerBlock will also keep the list updated itself, so that any new IPs that are identified can be automatically added to that list.

PeerBlock uses lot of source code from PeerGuardian (the open source software with a similar functionality). The developers of PeerBlock mention that they have removed lof of bugs that were present in PeerGuardian, and have made it more stable to use. PeerBlock is being actively maintained, and the bugs are addressed.