Disguise Folders is a free folder hider which is a very clever software to hide your secret files without even letting the others know that there is a secret file. The function of this software is not much complicated. Using Disguise Folders you will be able to convert the looks of the folder to a system folder which will attract no attention by any user from whom you want to hide the folder.

So this should be a better alternative to all the folder lockers and folder hider apps available. Most of those available software are not free and if they are free they are limited in features. This software is the best in doing its job and the only thing that used this idea before was Fake Folder. That software also used to fake folders as control panel but Folders Disguise gives you much more features than that. This free fake folder software will give you the best set of features among all the limited featured free programs. 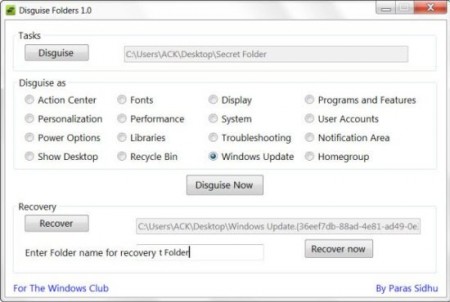 There are good number of choices like Action Center, Fonts, Display, System, Windows Updates, Homegroup, User Accounts, Personalization, Performance, Recycle Bin and many more. After selection click on the button Disguise Now! Instantly you will see that the folder you want to hide is replaced by a folder called Windows Update or Control Panel or whatever disguise you have chosen for it. Even clicking it will open up your Windows Update folder! To recover just select the recover button and find the disguised folder and then enter the folder name. Clicking recover now will place your old folder where it was before.

This free folder hider is completely safe and it has absolutely nothing to do with your system folders other than just linking the fake folders to those. The sad thing about this program is it is available only for the Windows 7 users.

You can also try Folder Hidden, Secure Folder and Folder Protector reviewed by us.