VLC 360 has been released to play 360° videos, photos, and Panoramas. It also comes with 3 different display modes, which will make it more interesting to watch 360 videos as well as photos. You can use Zoom, Reverse Little Planet, and Little Planet display modes. Currently, it is available as a technical preview (version 3.0.0) for Windows and Mac, but soon it will be available with the stable release. Also, in future, it will be available for iOS, Android, and Xbox One. Moreover, it is also being rumored that it will support the VR headsets (Oculus, Daydream, OSVR, etc.) also.

Nothing is changed in VLC 360. Everything from the interface to options and menus are same, except the fact that now VLC supports 360 degree photos, Panoramas, and videos. 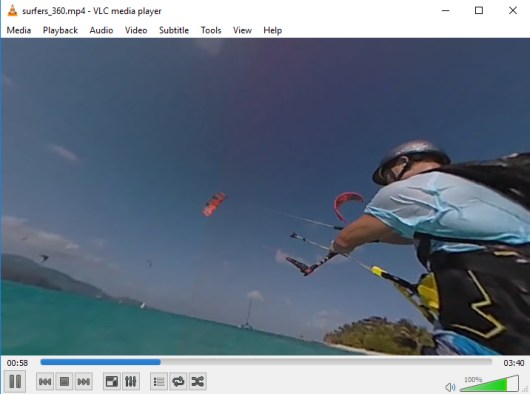 Above you can see the screenshot of the interface of VLC 360.

Just access the homepage of VLC 360 and get its technical preview setup. If you are already using VLC player, it will update the player with VLC 360. Its homepage also provides sample 360 videos and one Panorama image. However, you use any other 360 degree video and photo (MP4, JPG, etc.) supported by the player.

Open a 360 video and enjoy watching it. You can also use the mouse cursor to drag and look around in the video. Also, mouse wheel helps to zoom in and out in the video. 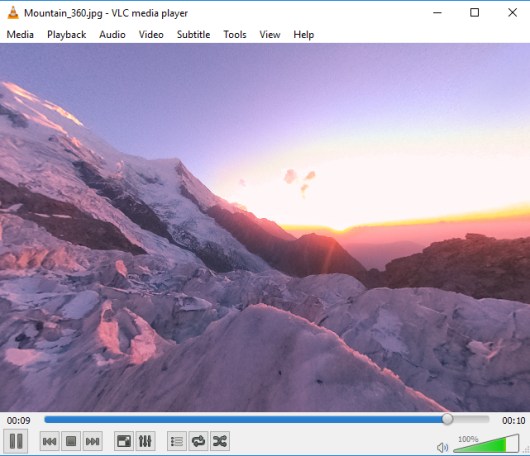 I also tried to find Little Planet and Reverse Little Planet display modes, but even after exploring the menus and options, I wasn’t able to detect those options.

So, this is what we have got with VLC 360. The rest of the options, playback controls, and other menus are same as the stable version of VLC.

During my testing, VLC 360 crashed multiple times. So, you probably want to wait for the stable release. However, if you are getting curious and can’t wait anymore, then just go ahead and download its setup. The great news is that now one of the most popular media player VLC has finally come with the feature to play 360 videos and photos.