Facebook has just launched FB Newswire, a service that aims at pulling out actual news-quality content from the endless pool of posts, videos etc. that are posted and shared by its users every second of every day. Facebook has partnered with News Corp owned Storyful, the social news agency that curates social media for quality content for its latest endeavor.

Storyful will go through all the posts on Facebook (of course, in an automated AI type manner), and find posts that are actually latest news. All such posts will be posted on FB Newswire page. So, anyone, especially journalists, can just go to that page and see what are the breaking news around the world. This will be a true crowdsourcing of the news.

Facebook’s everywhere. It’s the reason most of the people (teens, their parents, their grandparents) even use the Internet, so that they can log in to their precious FB accounts, and like and comment on instagramified selfies and food photos left and right. Billions of FB users share countless posts, videos, memes every single day. Some (Ok, most!) of these posts are outright ridiculous, but some are actually worthy of being known by the world. But how to make sure the world knows about something really important if it’s posted on Facebook?

Looks like the folks at Menlo Park, CA were thinking the same thing, so they came up with something to get it done. Say hello to .. Newswire (or FB Newswire) 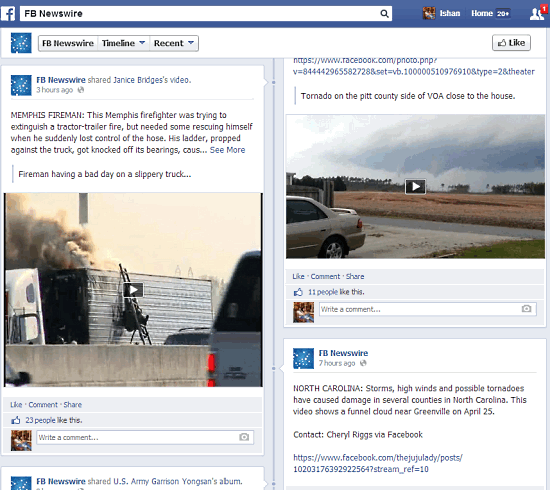 As you can see in screenshot above, the news are really breaking news type, like, some tornado news, fire break, etc. It is difficult for news outlets to be the first ones to get all breaking news, but FB, with its one billion users, can be the best source of such breaking news.

I think both. While FB Newswire itself claims to be a “resource” for journalists’’ all around the world, it’s quite clearly aimed at the 160 character powerhouse. Granted, the curated news-worthy social content is sure gonna be a resource for media persons for their breaking stories, but everyone knows that when it comes to real-time breaking news, Twitter rules the house. Not just journalists, but everyone looks to Twitter to know the latest happenings around the world. With FBNewswire, Facebook is trying to become journalists’ new source for news-worthy stuff, sans the 160 character limit. Nice move Zuck!

That’s the obvious question. I mean, with over a billion users posting tons of stuff every single second of every day (to put things in perspective, Facebook was adding half a petabyte of data every 24 hours, and that was in 2012!), it’s no easy task to find the things that actually matter. That’s why, Facebook has partnered with Rupert Murdoch’s News Corp owned Storyful, the social news agency that specializes in scanning the social media posts and pulling out news worthy content from them.

Storyful, thus, will scan all of the posts (textual posts, videos, vines, photos etc.) from Facebook users and find actual news worthy content from it. The curated content can then be used by journalists as a source while creating their news stories, and can be even directly embedded (in case of online journalism). I’m guessing that apart from the curation, Storyful will be also in charge of things like copyright issues, amongst other stuff.

Social media is a powerful, very powerful source of information broadcast. The Internet, combined with the power of social networking giants like Facebook and Twitter has greatly minimized the all night wait for the next day’s newspaper to know the latest happenings all around the world. While Facebook’s Newswire sure looks promising and will definitely help journalists all around the world, but how much it manages to achieve that end, considering that’s already its rival Twitter’s strong point, only time(line) will tell.