This article covers 6 free Windows 10 Morse code generator apps. Morse Code as we know is a communication method through character encoding. Text characters are encoded as sequence of dots and dashes with different signal duration. The standard Morse code is followed by everyone. Now if you want to communicate with your friends in secret then you can easily convert your text messages to Morse code. No one will be able to understand what you are sending apart from your friend. These apps will help you do that. The converted Morse code can easily be copy-pasted from the app to any other app. 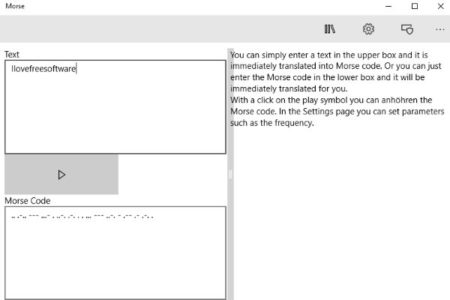 Morse is a nice app to generate Morse code messages. The app interface can be seen in the screenshot above. On the left side of the interface are two boxes. The first one is where you will enter the text and the second one will show you the created Morse code. You can also do the opposite of this. You can paste a message which you have in Morse code and this app will convert it for you to regular text. So the app works both ways. 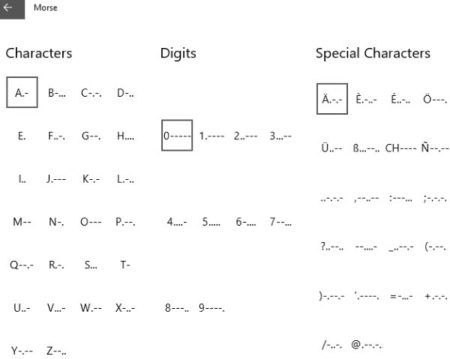 The books icon on the top left side will show you all encoding which is used for each alphabet and number. According to this encoding you can form your message. This section can be seen in the screenshot above. The settings option will let you change a few things in the app like the transfer rate, frequency, point length, stroke length, etc. That is pretty much about this app. 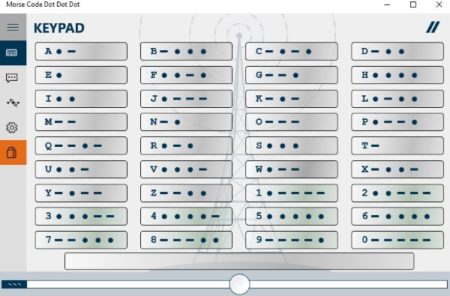 Morse Code Dot Dot Dot is a nice app to generate Morse code from text. The above image is the home screen of this app. When you launch this app this is the screen you will see. This is how the alphabets are encoded in Morse code. The left side of the app has the menu. In the menu you will find options like text to Morse code, Morse code to text, config, keypad, etc. When you click on text to Morse code link, you will be directed to a page like the one shown in the screenshot below. 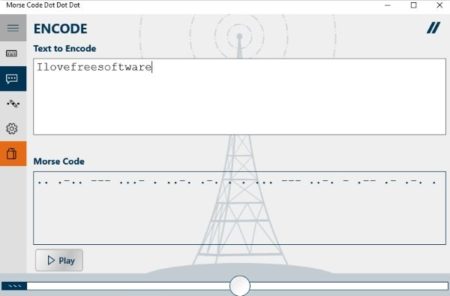 In this page you can input your text in the box provided and it will be converted to Morse code in the box below. You can copy the generated Morse code from the box below and paste it anywhere you like. Share this Morse code with your friends. You can even press the play button at the bottom of the boxes, which will play how the Morse code is sent using a device. You can hear the dots and dashes being pressed when you play the audio of Morse code.

Similarly, when you click on Morse code to text then also you will get a similar page like above. But here you have to copy-paste the Morse code that you want converted to text. You can even write your own Morse code using the instructions given. In the config section you can change a few things like volume, tone frequency, dot duration, word gap duration, etc. 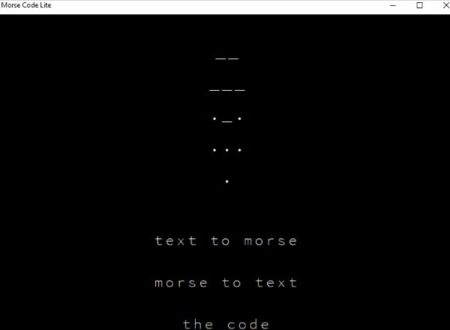 On this page you will see a play button at the bottom. Click on the play button and you will be shown how this Morse code will sound like when you send this message. While the code is playing you will get a option on screen which says tap to cancel. So if you want to stop in between you can just tap this option. But there is no option to copy this code, you can only play it with in the app. 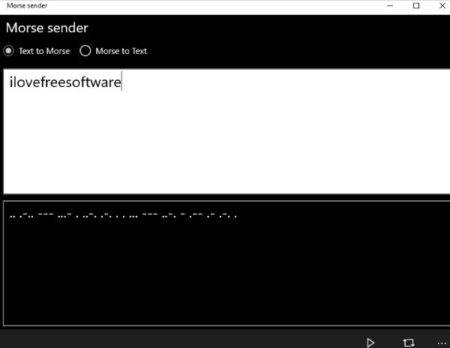 Morse Sender is a nice app to generate Morse code from text. When you launch this app you will see an interface like the one shown in the above screenshot. You can choose from the check boxes at the top whether you want to convert text to Morse code or Morse code to text. Now after that you will be shown two boxes. I choose text to Morse code, so I entered text in the box above and the Morse code was generated in the box given below.

Now you can play this Morse code using the play button given at the bottom of the app page. Playing this will let you listen to how the transmission of a Morse code will sound like. You can also copy this Morse code and send to your friends using various mediums. There is also a share option given in the app to share this code with anyone. 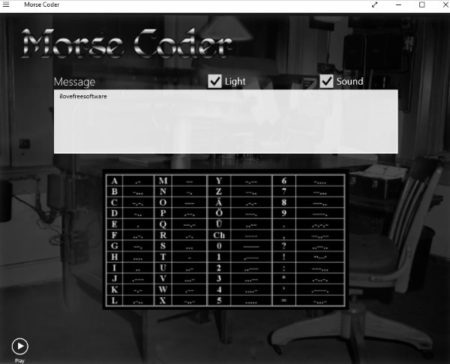 Morse Coder is a good app to generate Morse code from text. When you start this app you will see an interface like the one seen in the screenshot above. On this page you will have a box given where you can type in your text that you want converted into Morse code. You can also choose if you want to see light and hear sound when the Morse code is played by checking the options given above the text box.

Below the text box you will see alphabets and numbers and their Morse code representations in dots and dashes. Once you have entered your text, click the play button and the generated Morse code for the text will be played with light and sound. You can also share this code using the share option given in the menu. 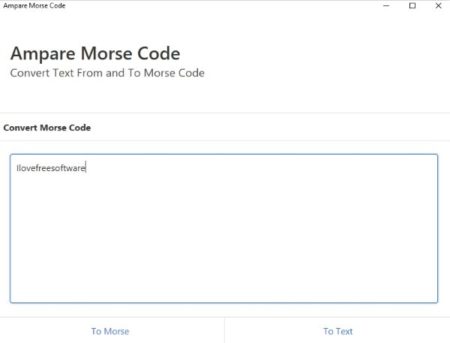 Ampare Morse Code is a nice app to generate Morse code from text or vice versa. You will see an interface like the one shown in the screenshot above when you start this app. The app has a pretty simple interface. You can generate Morse code from text or text from Morse code. Enter your text in the box given on the page. After entering text click on to Morse button given below the text box. 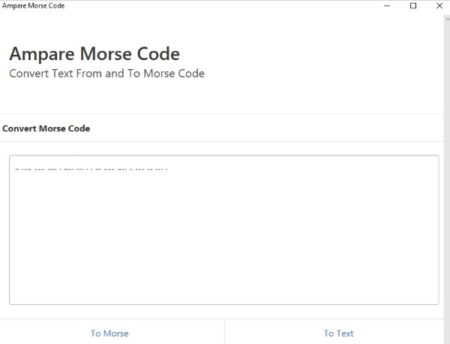 The Morse code for your text will be generated like shown in the screenshot above. You can copy this generated Morse code and use anywhere you like. You can also click the to text button to convert the Morse code back to text.

These are some good apps to generate Morse code from text. You can use these apps to encode messages which you want to send to your friends. It can become a secret way of communicating with your best friend which no one understand. So go ahead and try these Morse code generator apps for Windows 10 and let me know which one you liked the most.